The movement to achieve net-zero global greenhouse gas emissions, is gaining traction and coherence, especially in the world of finance. In late March, BlackRock and Vanguard — the two largest asset managers on the planet — joined a growing coalition of investors in the Net Zero Asset Managers Initiative (NZAM). The initiative outlines key requirements for signatories’ commitments to net zero and provides an early benchmark for the industry. Earlier in March 2021, asset managers also received initial guidance for implementing net-zero commitments with the release of the Net Zero Investment Framework Implementation Guide, an effort led by the Institutional Investor Group on Climate Change.

These emerging industry coalitions, and their growing support among asset managers, are critical. To avoid the worst impacts of global warming, we need every financial organization to have robust, credible plans for shifting investment portfolios toward net-zero by 2050 or sooner.

But, as NZAM itself notes, there is still ambiguity about what a credible, robust and science-based net-zero investment portfolio actually looks like. It is not surprising, therefore, that financial institution net-zero commitments still leave many unanswered questions around key issues like definitions, interim targets, use of offsets and transparency. This includes those from BlackRock and Vanguard.

Given their size, BlackRock and Vanguard have tremendous market influence. Together, they manage over $15.2 trillion in assets, an amount equivalent to about three-fifths of U.S. GDP. This gives them the capacity to set the course for meaningful net-zero action within the asset management sector. It’s critical that their next steps demonstrate their seriousness and urgency in implementing their net zero commitment. 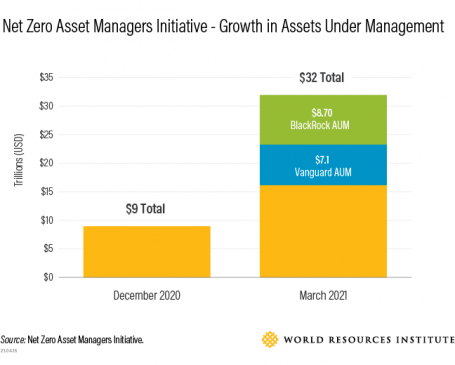 An Opportunity to Lead by Example

BlackRock had already committed to support the global goal of achieving net-zero emissions by 2050 or sooner prior to joining NZAM, while Vanguard had not. Vanguard has also not publicly elaborated on its net-zero plan apart from a brief statement from its CEO on the NZAM website. Meanwhile, BlackRock, in its annual letter to clients published in January 2021, laid out its commitment and presented a three-pronged action plan to help investors prepare their portfolios for a net-zero world.

Nonetheless, important questions remain. For the firm to genuinely lead the race to net-zero, BlackRock must provide more clarity on several issues. We spotlight four ways it can do so: with strong interim targets, by avoiding over-reliance on offsets, by improving engagement, and by supporting a just transition to net zero. While we explore these questions in the context of BlackRock’s action plan, Vanguard and other asset managers should also take note.

1. Interim Targets Based in Science

While commitments for 2050 are an important signal, financial institutions must deliver swift, dramatic reductions in global emissions over a much shorter timeframe and with near-term actions that avoid lock-in of carbon-intensive infrastructure and behavior.

To that end, later this year BlackRock will announce its interim target for the percentage of its assets under management that will be aligned with net-zero in 2030. (The expectation is that they will ratchet up the target until 100% of assets are included.) Setting interim targets demonstrate the shorter-term changes the firm will make to deliver on long-term emissions reductions goals.

But what is considered a good net-zero target?

In September 2020, the Science Based Targets Initiative (SBTi) launched a process to develop a global standard for net-zero corporate targets. A parallel standard for financial institutions is expected to follow. The foundational principles present ten recommendations for corporate net-zero targets that ensure a company reduces emissions at a rate consistent with pathways that limit warming to 1.5 degrees C (2.7 degrees F) and takes responsibility for residual emissions.

While a standard for net-zero targets for financial institutions is still on the horizon, BlackRock, Vanguard, and other asset managers can use the recently launched SBTi framework for financial institutions to set targets to make their investments consistent with a 1.5 degrees C mitigation pathway — a critical part of the net zero equation. To take responsibility for residual emissions yet to be reduced, or those are unfeasible to eliminate, the firms can draw from the foundational principles for corporate net-zero targets. The NZAM has pledged to work with SBTi and others to develop standardized methodologies.

BlackRock supports the development of global carbon offset markets as a tool to help companies achieve net-zero emissions. Offsets are meant to allow companies to compensate for emissions by paying for emission reductions somewhere else or neutralize their emissions by investing in removal technologies.

However, they should not distract from the need for real and significant reductions in emissions associated with a company’s value-chain. Indeed, one of the NZAM requirements for net-zero assets under management is for offsets to be focused on long-term carbon removal where there are no viable alternatives to eliminate emissions (for example, in heavy industry where zero-carbon alternatives don’t yet exist). While BlackRock acknowledges that offsets cannot replace emissions reductions, the firm provides little transparency into how it will approach the issue.

One way for BlackRock to ensure it will not rely too heavily on offsets to reach net-zero emissions is to commit to exclude from its proportion of net zero assets under management any high-emitting sectors that can be decarbonized today. For example, this would mean excluding BlackRock’s $85 billion holdings in coal companies from the proportion of its assets under management that it designates as part of its net zero target.

BlackRock’s stewardship is extremely powerful. As the largest asset manager in the world, it owns more than 5% of the shares in the majority of public companies — an amount that could make or break a shareholder resolution or Board director election. And in its 2021 letter, BlackRock reups its commitment to climate stewardship and engagement. This seems aligned with the commitment of NZAM signatories to implement an engagement strategy with clear escalation and voting policy. But some NGOs view BlackRock’s commitment with skepticism because of its poor record on climate engagement and voting.

Despite BlackRock CEO Larry Fink’s calls in 2020 to hold directors accountable for climate action, the firm only supported 14% of shareholder resolutions requesting climate-related financial disclosures. BlackRock also consistently votes against resolutions to improve corporate disclosures of lobbying and political contributions, which have impacts on climate change and other social and environmental issues. In 2020, the firm voted against all 48 resolutions to promote greater transparency into political spending and lobbying at S&P500 companies, while only supporting 18% of climate lobbying resolutions.

One of the reasons why stewardship and engagement are so critical for BlackRock is because it owns the investment universe. This means its investments represent a slice of the entire economy. While BlackRock cannot divest from all carbon intensive sectors, it can engage with carbon intensive companies to encourage meaningful steps toward climate action. At a minimum, BlackRock should use active and escalating engagement strategies to help ensure no new thermal coal generation is developed and no further tar sand resources are exploited, and also that phase-out of existing unabated capacity is undertaken in line with net-zero pathways — as recommended by the Net Zero Investment Framework Implementation Guide.

To push the net-zero movement forward, BlackRock needs to show more consistent support for corporate transparency and climate action in its voting in 2021.

4. A Just Transition to Net Zero

There is no doubt that reducing greenhouse gas emissions — and transitioning away from fossil fuels — is a critical component of climate action. But it is not just about emissions. If the net-zero transition is to be sustainable and credible, it must also lead to a more inclusive, resilient and equitable economy and achieve the broader goals of the Paris Agreement. It is therefore vital for net-zero emissions targets to incorporate robust social and environmental principles.

Fink acknowledged the importance of these issues in his 2021 letter to CEOs, as well as the direct relationship between racial justice and economic inequality to climate change. But he offered no commitments on how the firm will ensure its net-zero strategies reflect this.

BlackRock cannot solve the climate crisis alone, but it can help set the course to create a better future. Doing so will require that the firm takes to heart Fink’s message from his 2019 CEO letter on social purpose when implementing its net-zero commitment. In that letter, he pleaded to companies that “the world needs your leadership.” The world also needs leadership from BlackRock — and Vanguard, too.

Leaders in the Spotlight

While Vanguard’s decision to join NZAM is welcome, the firm has provided far less detail on its net-zero plan than BlackRock. We need to see more clarity around their implementation plans soon. Nevertheless, it is a huge step for the asset management industry that the two largest managers have joined the NZAM. Together, BlackRock and Vanguard contribute almost half of the total NZAM signatories’ assets under management of $32 trillion, giving them tremendous influence on the course for net-zero implementation.

The steps these two managers take in the coming months will reveal how they’ve decided to wield their influence. We’ll be watching to see if the firms implement their bold new commitment in a robust way that sets a strong example for the asset management industry.