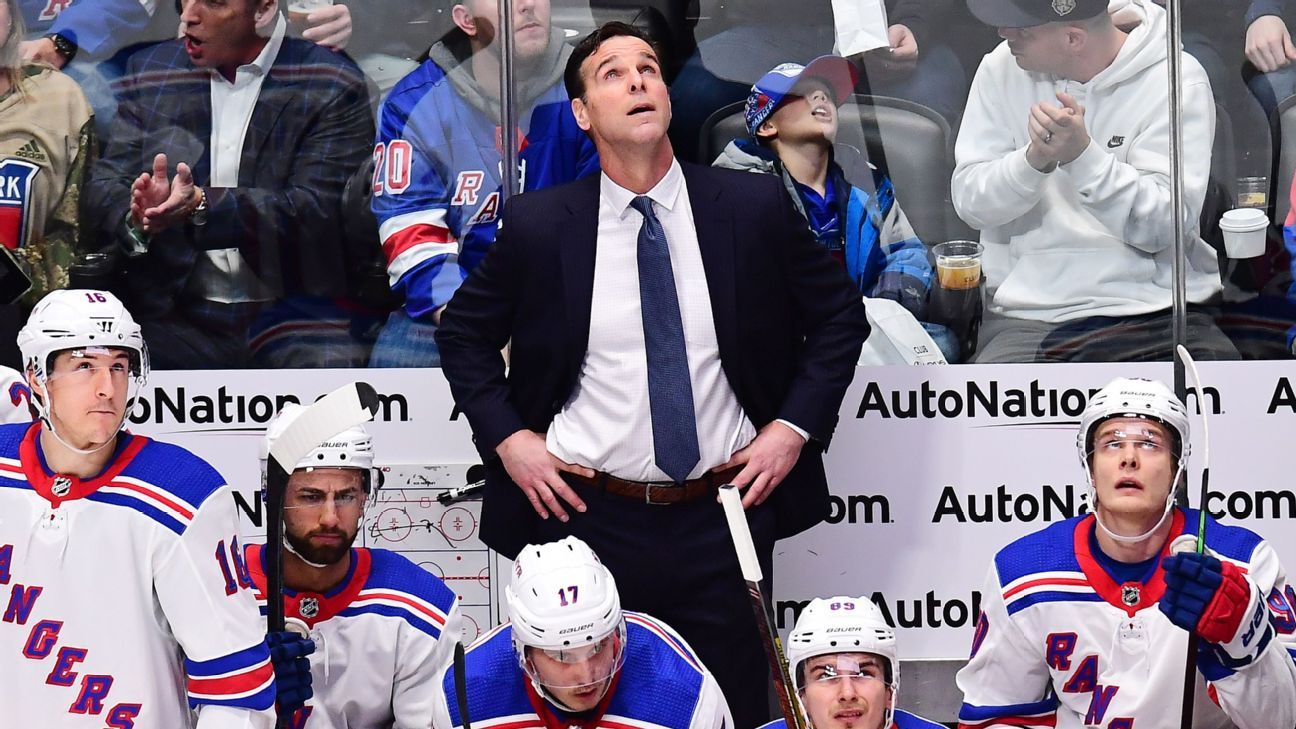 All of Quinn’s assistants, except for goalie coach Benoit Allaire, were also let go, according to sources.

The New York Post was the first to report about Quinn’s dismissal.

The firing caps off a wild week and a half for the Rangers. Last week, the team also fired general manager Jeff Gorton and team president John Davidson. That news came on the heels of a statement the Rangers put out criticizing NHL Department of Player Safety head George Parros, calling him “unfit for the job” after he did not suspend Capitals winger Tom Wilson.

The NHL fined the Rangers $250,000 for that statement, with Gary Bettman saying: “Public comments of the nature issued by the Rangers that were personal in nature and demeaning of a league executive will not be tolerated.”

The Rangers have insisted that the firings of Davidson and Gorton were not related to the statement but instead because the team wanted to go in a different direction.

The team promoted Chris Drury to general manager, and he will conduct a search for a new head coach. The Rangers have plenty of veteran options to turn to — including Gerard Gallant, Rick Tocchet, Patrick Roy or their former coach, John Tortorella, who is out at Columbus after six years. If New York wants to go in-house, its AHL coach, Kris Knoblauch, is considered a strong candidate.

The Rangers wrote a letter to fans in February 2018 announcing they would enter a rebuild. The Rangers hired Quinn in May of that year and signed him to a five-year deal. Quinn, formerly the coach at Boston University, was tasked with ushering the Rangers through the rebuild.

The Rangers have totally turned over from the team that made it to the 2014 Stanley Cup Final. Chris Kreider is the only remaining player on the roster from that team.

New York landed the No. 2 pick of the 2019 draft (Kaapo Kakko) and the No. 1 pick in 2020 (Alexis Lafreniere). However, the Rangers’ only playoff experience under Quinn was a three-game sweep in the 2020 bubble qualification round. The Rangers were one of the youngest teams in the NHL this season and saw several players — specifically Pavel Buchnevich and Adam Fox — make big leaps. After a slow start, the Rangers were pushing for a playoff spot over the season’s final few weeks.

“I think the group really came together over the course of the year,” Kreider told reporters at his end-of-season news conference. “Youngest team in hockey, a lot of new faces, lot of new guys stepping into roles and positions they may not have been in the past. I think the entire year was a terrific learning experience.”

There were also a series of off-ice issues the Rangers needed to navigate through. In February, the team dismissed promising young defenseman Tony DeAngelo for getting in an altercation with teammates despite signing him to a two-year, $9.6 million deal this past offseason. Star winger Artemi Panarin took a leave of absence from the team after allegations surfaced that he reportedly assaulted a girl in Latvia in 2011. The Rangers called the story a fabrication and a way to intimidate Panarin for “being outspoken on recent political events” in his native Russia. Panarin has since rejoined the team, and the claims were never corroborated.

At their end-of-season news conferences, many Rangers players alluded to new pressures for 2021-22.

“That message has been sent and received,” forward Ryan Strome said. “We’ve just got to get into the playoffs.”