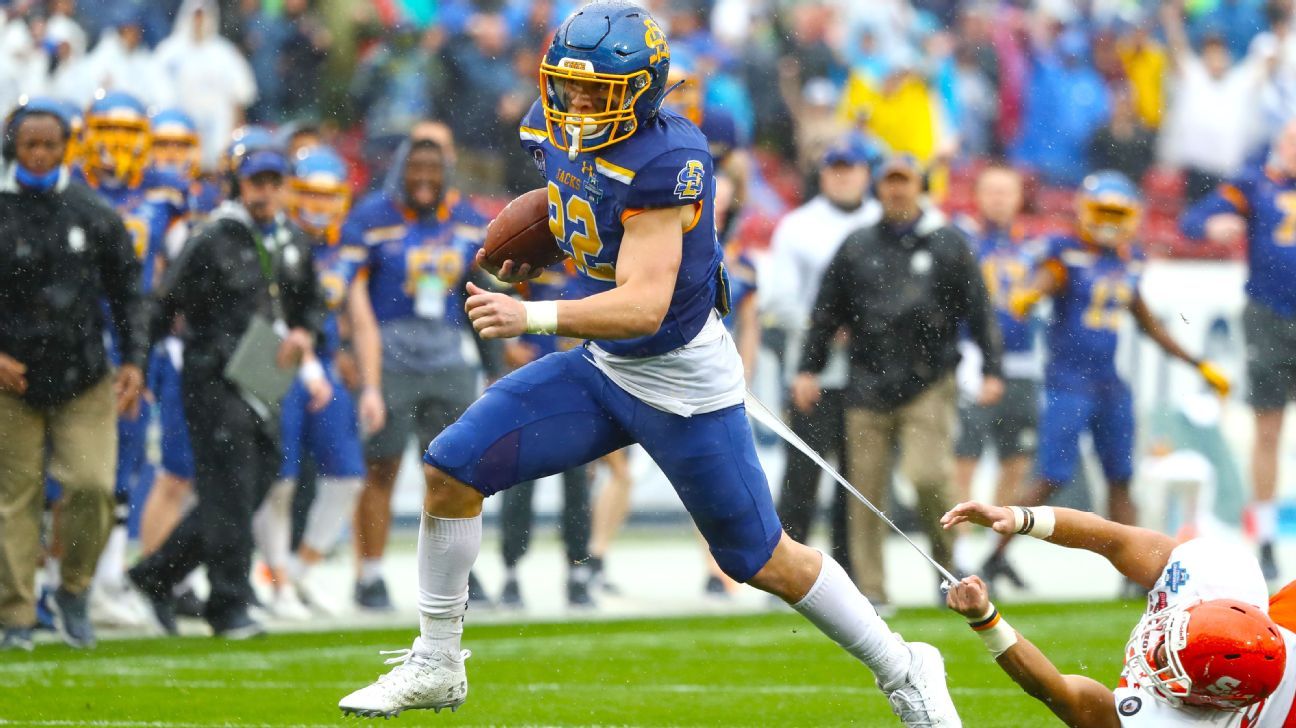 Jequez Ezzard caught two touchdowns for No. 2 seed Sam Houston (10-0). He also had a 5-yard catch on fourth-and-3 to extend the final 16-play, 65-yard drive, after Schmid converted an earlier fourth-and-1 with a 9-yard run.

South Dakota State (8-2) went ahead 21-17 on Isaiah Davis‘ third TD run, an 85-yarder with 5:41 left. Davis, who finished with 178 yards rushing on 14 carries, went down the sideline in front of the Jackrabbits bench, eluding half of the defense before breaking free to the end zone.

Sam Houston coach K.C. Keeler got his record 24th FCS playoff victory, and became the first coach to win FCS titles at multiple schools. He was the coach of his alma mater when Delaware won the 2003 title.

It was the first title game appearance for South Dakota State and coach John Stiegelmeier, who has coached his alma mater for 24 seasons. The Jackrabbits lost dual-threat freshman quarterback Mark Gronowski to an apparent left leg injury on the opening series of the game.

Ezzard’s second TD was a 15-yarder late in the first half, when he was wide open in the end zone. That occurred shortly after the game resumed following a 74-minute delay because of lightning. The halftime break was shortened to three minutes.

That weather delay came in the final game of a season pushed into the spring, and ending in mid-May instead of early January, because of the coronavirus pandemic. The next season kicks off in only 3 1/2 months.

The game started in a steady rain. It was tied 7-7 with 8:25 left in the second quarter when it was stopped because of lightning from the same weather system that impacted the final round of the PGA Tour’s AT&T Byron Nelson tournament in McKinney, Texas, less than 10 miles away. There were tornado warnings south of the area.

When play resumed, the rain had stopped, and the sun even broke through the grey skies before the end of the game.

Gronowski likely got hurt on a 3-yard run when he fumbled, though South Dakota State recovered and he then had a third-down incompletion before limping off the field. He got on a stationary bicycle on the sideline before trying to throw a ball, but stopped in obvious pain because of the pressure on his left leg stepping through the throw.

The Jackrabbits got the ball back when Schmid couldn’t handle a high snap that was recovered by Tolu Ogunrinde at the Sam Houston 41, leading to a 1-yard score by Davis immediately after his 20-yard gain. Davis broke three tackles on a 28-yard TD early in the fourth quarter.

Before the delay, the Bearkats tied the game on Ezzard’s 35-yard TD. He got the ball behind the line before cutting back at the 25, then broke free from a tackler while running across to the other side of the field.

He had a 63-yard punt return for a touchdown late in the first quarter wiped out by an illegal block penalty.

Ezzard had a 69-yard TD catch and an 80-yard punt return for a score when the Bearkats overcame a 21-point halftime deficit in a 38-35 win a week earlier in the semifinals against No. 3 seed James Madison, the only team other than eight-time champion North Dakota State to win the FCS title the past nine seasons. Sam Houston in the quarterfinal round eliminated the Bison, who won the title the last three years.