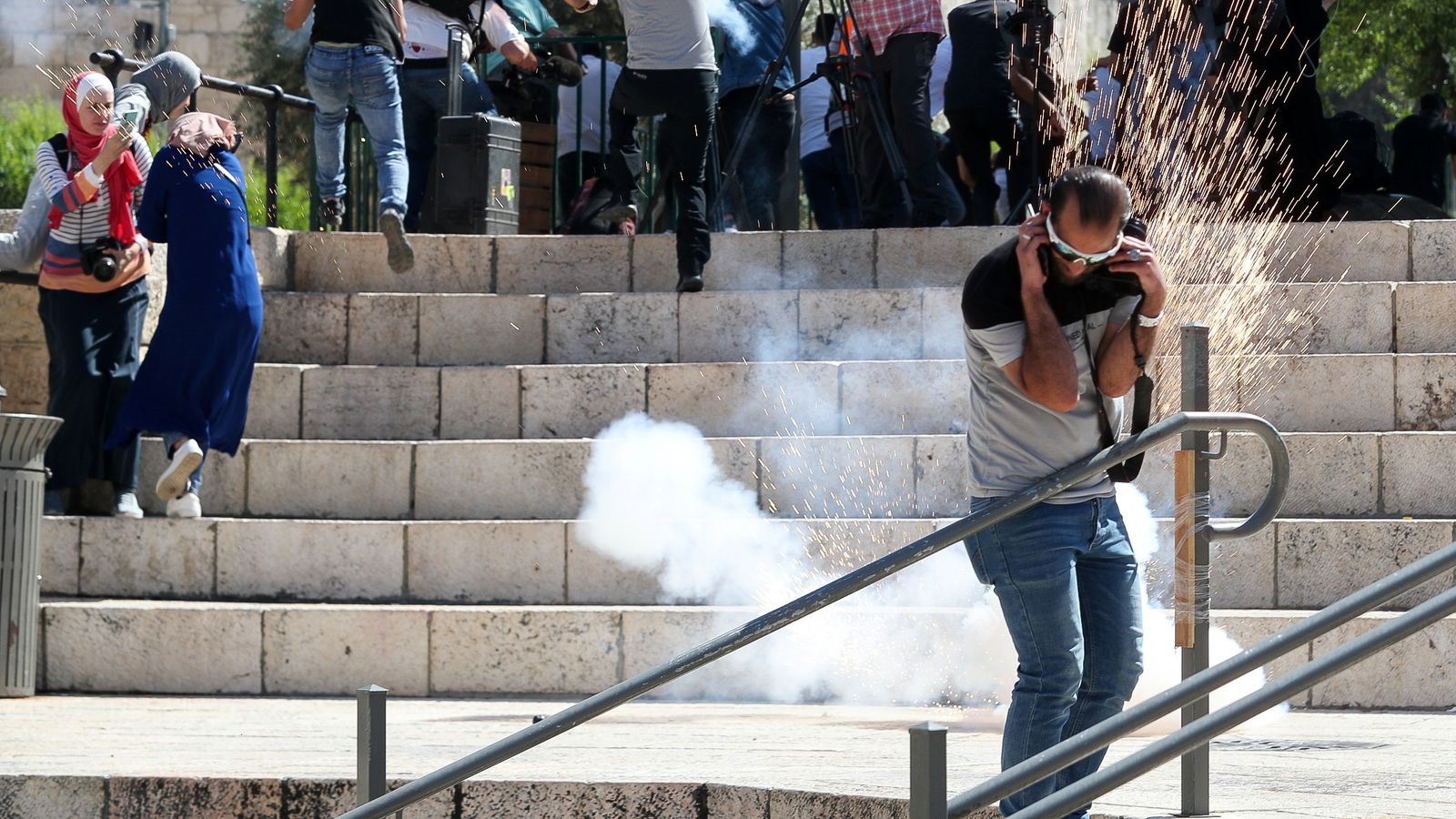 It started with a skirmish in Jerusalem’s historic Old City.

A protester, seemingly unconscious, was being carried away by Israeli police.

His hands, limp but cuffed behind his back.

Out by Damascus Gate, Palestinian protesters started to assemble.

They’d been called to demonstrate against the Israeli airstrikes of Gaza and as part of a wider outcry of anger against what they sense as Palestinian suffering under Israeli rule.

At around 3pm what was only a relatively small group of protesters – perhaps one or two hundred mainly young men and women, including at least two waving the Palestinian flag – started chanting.

“Your night will soon be over.”

They were at the foot of the steep stone steps that curve down to Damascus Gate, one of the entrances to the Old City.

The anti-Israeli chants did not last long.

Suddenly a bang as a stun grenade coughed out smoke.

The crowd started to scatter, then a white-coloured water canon vehicle moved in.

Armed with what people call “skunk water”, because it stinks and leaves a stench on anyone it hits, the truck blasted a stream of spray over anyone in its way.

I was able to jump into a little enclave, cut into a wall, along with about a dozen protesters.

Michael wasn’t so lucky, receiving a burst of spray up his back.

The stun grenades continued to be thrown by the police, scattering the ragtag group of protesters up the road.

“Now we move to Sheikh Jarrah,” one young woman, who I’d huddled in the enclave with, told me.

She was referring to a flashpoint neighbourhood also in East Jerusalem where a Jewish legal attempt to evict Palestinian families from their homes was one of the triggers of the wider Israeli-Palestinian crisis.

We jumped into our car and made the four-minute drive to the area.

Protesters were already assembling across the street from a road at the heart of the Sheikh Jarrah controversy, where a number of families threatened with eviction live.

The police were on the other side, with their water cannon.

Once again the chants started.

A stinking jet of putrid liquid sprayed demonstrators up the street, followed by a volley of stun grenades, lobbed by the police.

The officers, dressed in grey and black uniform, helmets, flak jackets and armed with rifles, marched in a group after them.

Despite being completely outgunned, the protesters didn’t give up.

Minutes later, the police escalated their response, firing rubber bullets towards the protesters, even as they were running away.

I saw one man who appeared to have been injured in the stomach. He clutched his side and moaned before being led into an ambulance.

Mounted police on horseback also appeared, trotting along with a group of policemen – an intimidating sight for anyone standing on the ground.

A family living in a house on a side street where a crowd of police were standing, stepped outside and started yelling at them.

After about half an hour of back and forth, roughly the same number of protesters had returned to their original point at Sheikh Jarrah, only for the police to charge forward yet again and send them scattering.

It looked set to be a long afternoon.