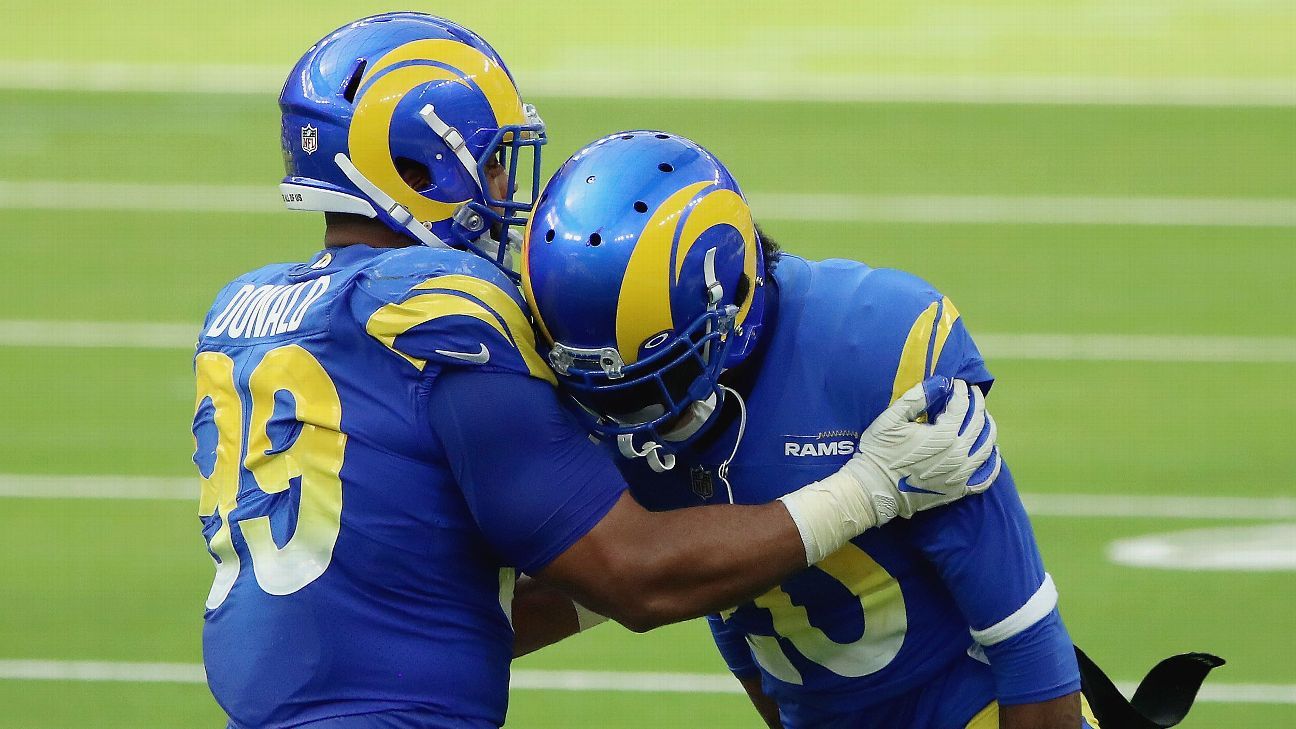 THOUSAND OAKS, Calif. — With the promise of an improved offense, the Los Angeles Rams‘ defense is preparing for an encore performance.

Last season, three-time Defensive Player of the Year Aaron Donald and All-Pro cornerback Jalen Ramsey spurred the unit to the top of the NFL.

Both star playmakers return after a 10-6 season that resulted in divisional playoff loss to the Green Bay Packers. So does outside linebacker Leonard Floyd, who signed a four-year, $64 million deal after a career-best campaign in which he tallied 10.5 sacks.

But gone is defensive coordinator Brandon Staley, who inherited a defense that ranked ninth in efficiency and improved it to first in his only season before departing to become the Los Angeles Chargers‘ head coach. Enter defense coordinator Raheem Morris, who held the same post last season with the Atlanta Falcons for five games before being promoted to interim head coach.

Morris takes over a defense that allowed a league-low 18.5 points in 2020. He is expected to maintain what Staley installed, including the base 3-4 scheme, but will add some of his own wrinkles to shape a unit that can propel the Rams to Super Bowl LVI at SoFi Stadium next February. 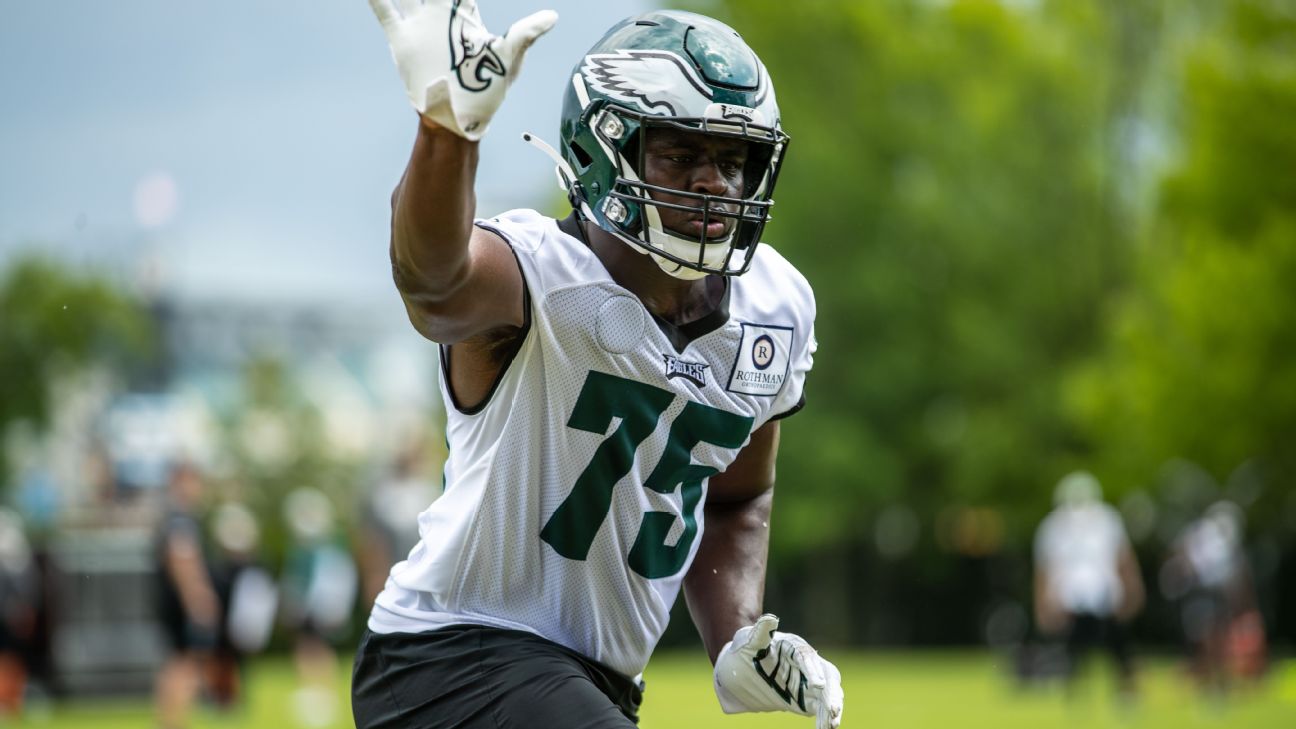 “I don’t think it’s pressure,” Morris said at his introductory news conference when asked about taking over the league’s top-ranked defense. “I think it’s more of an opportunity.”

Last season, the Rams ranked No. 1 in passing yards allowed per game at 190.7. They ranked No. 3 against the run, allowing only 91.3 rushing yards per game.

Entering the NFL draft last month, Rams coach Sean McVay said the Rams did not have any glaring holes that needed to be filled. Along with Donald, Ramsey and Floyd, the Rams also return cornerback Darious Williams, whose coming off a breakthrough season that included four interceptions, and defensive tackle Sebastian Joseph-Day, a former sixth-round pick who is entering his third season as a starter.

But some of their key playmakers have departed.

“You look at each of them and there’s a vision that we have for them and how they fit, how they provide value for a football team,” said McVay, who’s entering his fifth season as coach.

A third-round pick, Jones is expected to compete for playing time in a linebacking corps that has struggled with health and depth the past two seasons.

“I’m going to deliver whatever they tell [me] and the tasks they put in front of me,” Jones said. “It’s going to get handled on my end.”

The Rams used two of their picks to bring in reinforcements for the defensive line.

Bobby Brown III, a fourth-round pick, admitted in the moments after he was drafted that Donald was among his favorite players. Coming off a 13.5-sack season, Donald will attempt to make a quick study of Brown as the two try to build a chemistry that Donald built over seven seasons playing alongside Brockers, a first-round pick in 2012. Their first meeting was a positive step in that direction.

When you finally get to meet @AaronDonald97.

“Bobby is a large human being, very athletic, very strong,” Rams general manager Les Snead said. “So, definitely felt like he was worthy of picking there at the start of the fourth round based on that skillset.”

And Earnest Brown IV, a fifth-round selection, has the ability to play multiple spots like former Rams defensive lineman Morgan Fox, a key role player who signed with Carolina in free agency.

“He’s someone that can add versatility of maybe playing inside and also outside a little bit,” Snead said of Brown IV.

The Rams’ rookie minicamp was more an orientation and less football instruction. The rookies will be thrown into the mix during voluntary team organized activities, which got underway this week, and the Rams are scheduled to hold mandatory minicamp the second week of June.

What you need to know about the Los Angeles Rams:

As Morris’ defense begins to take shape, several key questions must be answered through the offseason: Who will step up to rush the passer opposite of Floyd? Who will take over as the signal-caller — a role previously held by Johnson? And how will Donald and Ramsey be deployed to keep opponents guessing?

Second-year pro Terrell Lewis and Ogbonnia Okoronkwo will compete to earn the starting spot on the edge. Morris could opt to send signals in via linebacker or safety — perhaps Taylor Rapp, who is expected to fill in for Johnson, who signed with Cleveland in free agency.

And as for Donald and Ramsey, watch for Morris to utilize their talents in a similar way that Staley did, lining them up in sometimes unexpected spots or formations to maximize their ability and allow them to make plays on the football.