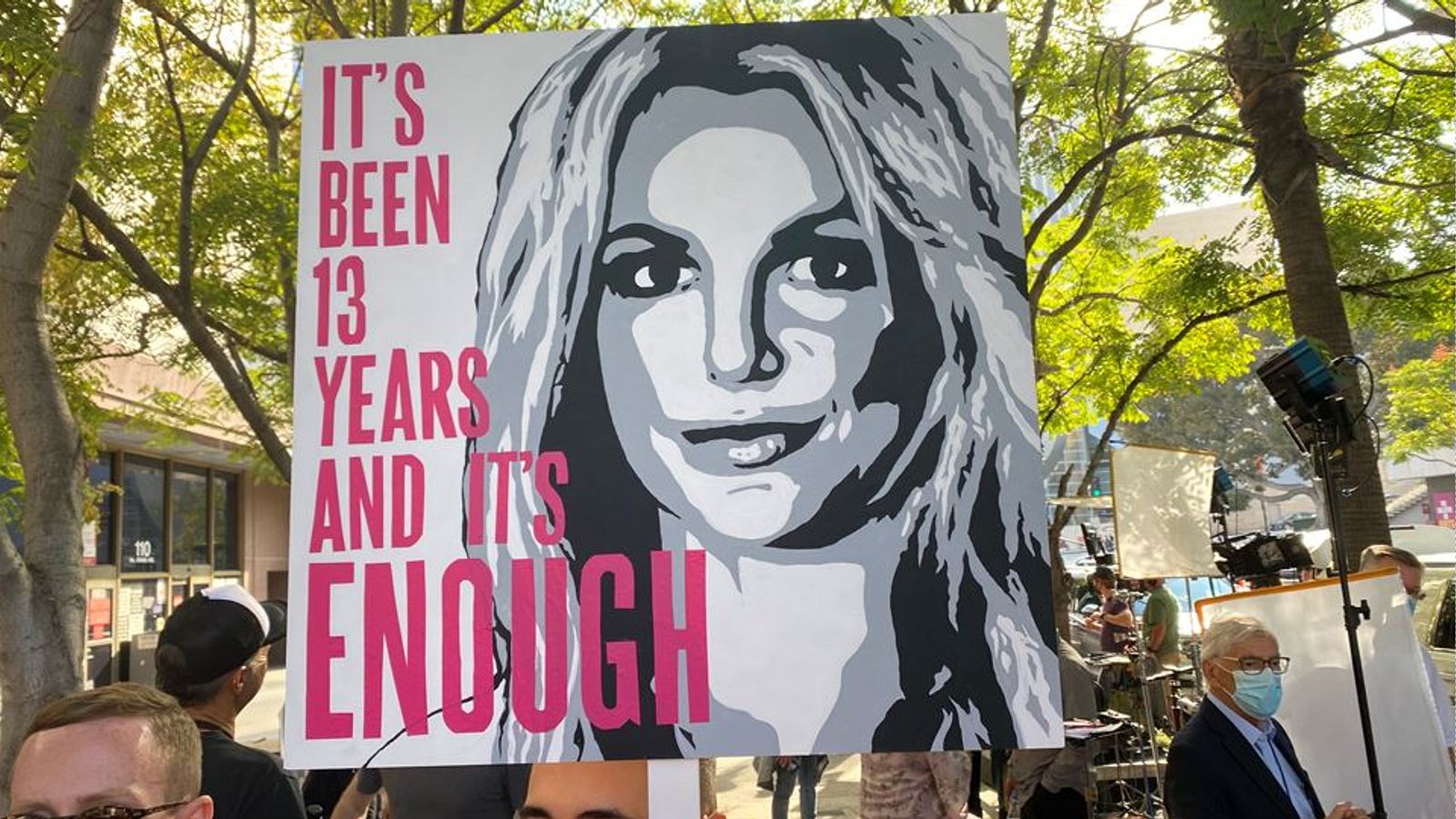 Britney Spears is potentially finally set to be freed today from the conservatorship that has controlled her life for more than 13 years.

A hearing in the high-profile case is due to take place in Los Angeles this afternoon – later this evening UK time – and after years of legal battles both public and private, Superior Court Judge Brenda Penny is widely expected to terminate the legal agreement, or at least begin the process.

It comes after Spears spoke publicly in open court for the first time in June, delivering a bombshell statement in which she described the conservatorship as abusive and condemned her father Jamie Spears and others who have controlled it. At a follow-up hearing in September, her father – who has strenuously denied any wrongdoing – was removed by the judge from his role in the agreement.

One key issue on ending the arrangement completely is whether the judge has ruled that a medical evaluation of the singer be carried out, something Spears had resisted earlier in the year. It is not known whether or not this has taken place.

Should the conservatorship be ended today, it will no doubt change the star’s life.

Jamie Spears had been largely in charge since the conservatorship was put in place in 2008; he gave up control of his daughter’s personal affairs in 2019 – with court-appointed professional Jodi Montgomery taking over – but stayed in control of her finances until he was removed in September. He has been replaced by John Zabel, an accountant chosen by the star – who is estimated to have a fortune of around $50-$60m (about £37-£45m) – and her lawyer.

Since the #FreeBritney movement really took hold early in 2019, Spears’ plight has attracted worldwide attention, raising questions not only about her situation but about other conservatorships, also known as guardianships, across the US.

The termination of the agreement, if it does come today, will by no means be the end of the story.

Will there be further investigations?

Spears’ attorney Mathew Rosengart (pictured above in July), who was appointed earlier this year, has called for an investigation of Jamie Spears’ handling of the conservatorship. The behaviour of others involved in the arrangement and some who worked in Spears’ team over the years has also been called into question.

In a since-deleted Instagram post, the star has accused her mother Lynne Spears of being behind the conservatorship and “ruining” her life. And in a court filing earlier in November, former business manager Lou Taylor, chief executive of Tri Star Sports and Entertainment, denied secretly recording the pop star’s conversations or controlling her medical treatment – allegations that came out in Controlling Britney Spears, the second of two New York Times documentaries on the case.

Many who have followed the case closely are calling for further investigation.

“I think everyone who was complicit in the trafficking of Britney Spears should be held accountable,” says #FreeBritney LA organiser Kevin Wu, referencing Spears’ own comparison of being forced to work and perform to that of sex trafficking victims.

“It includes her family members, who she called out in court: her mom, Lynne Spears, her dad, Jamie Spears, who was the conservator and benefited financially from this conservatorship for 13 years.”

Conservatorship activist Dr Teresa Kay-Aba Kennedy, the founder of Elder Dignity, which works to transform the adult guardianship system in the US and was set up following her aunt’s experiences under guardianship, says today’s hearing is a long time coming.

“There is individual and institutional accountability that needs to happen,” she says. “There needs to be a full investigation, a thorough investigation, to see who did what, who was complicit in wrongdoing.”

New York Times journalist Samantha Stark, director of Controlling Britney Spears, says many people who worked with the star under the conservatorship have been afraid to speak out as they signed NDAs (non-disclosure agreements). “It’s really unclear how long [any investigations] would take and how it would go through the court system,” she says. “So we’ll see what happens and see if the past 13 years ever gets truly investigated.”

What happens next for Britney?

A conservatorship can be dissolved by a court but it is very rare that a conservatee themselves achieves their own release, as will be the case for Spears if she is successful.

Regaining her personal and financial powers after so many years will take some untangling and the process could take a long time. A care plan for the transition has been put in place, according to US media reports.

Jamie Spears and his attorneys always justified the conservatorship by arguing that the star was especially susceptible to people who seek to take advantage of her money and fame, and always stressed that they have only ever acted in her best interests.

If arrangement is terminated, the star will likely hire financial managers and assistants to perform many of the same duties previously performed by the arrangement. But crucially, their decisions would be subject to her approval, rather than being made for her – and she could make decisions on hiring and firing.

“It’s so rare that a conservatorship ends,” says Ms Stark. “Something that we found in our reporting is that it really felt like Britney’s support system was taken away from her. We heard over and over again, people say ‘I wanted to help Britney, I’m her friend and I wasn’t allowed to talk to her’, or ‘I feel like they weren’t turning her against me’.

“A concern is, you know, when you’re isolated for so long, who will support her? Hopefully she has that and is able to live the life she wants.”

But in her personal life, things already seem to have changed for the star in the past year. Since speaking out in open court, Spears has written honestly about her feelings on social media and thanked #FreeBritney supporters, and in September she announced her engagement to partner Sam Asghari.

How will this case affect other conservatorships in the US?

Spears’ case has certainly shone a spotlight on the guardianship system in the US. Dr Kennedy says her aunt, Lillie Sykes, was exploited and isolated before her death, and that there are “thousands of other victims” across the US.

“The #FreeBritney movement has brought to light that this is a human rights movement,” she says. “It’s not just about one person. [Spears’ case] has educated people. The public has gotten engaged, legislators on a bipartisan basis – which hardly ever happens – have gotten engaged.

“There is much work to be done but to have that kind of spotlight is important. I’ve personally been fighting and educating people for nine years in terms of abusive and predatory guardianships, but it’s been an uphill battle. To have someone with Britney’s celebrity to bring attention on this is so very important to future policy and reforms that can be made.

“Right now, the system is archaic and oppressive, and it’s time for us to craft a new path that is positive and that will again allow people to flourish.

“It’s systemic injustice and there are crimes actually being committed. And we need the laws and we need the training of law enforcement and all people in the judiciary to understand the dynamics of this crime and do something about it.”

Spears’ damning testimony in June did prompt two members of US Congress to propose a bill to reform the system. Could there be more to come if the conservatorship is lifted?

“It’s raised the question, should [conservatorships] exist at all because they take so many rights away from a person,” says Ms Stark. “I think there’s a thing called supported decision making, that a lot of disability rights activists talk about, where the person still makes their own decisions, but they have advisers who help them.

“And you know, that’s something that seems on the table, but I definitely think this is going to change things. And Britney herself expressed in court, there are thousands of other abusive conservatorships – so I have a feeling she might become someone who helps make change as well.”