Outside a detention centre in the Polish city of Bialystok, where we know asylum seekers who crossed the border from Belarus are being held, we meet a local mother and son.

They have arrived as visitors. The mother, who only wants to be known as Zofia, is carrying a bag of clothes. She plans to give them to a woman she met two weeks ago living rough in the woods near her home.

The woman was among five asylum seekers from Kurdistan who’d managed to enter Poland from Belarus. They had been hiding out in the forest between the two nations. And they were desperate, barefoot and starving.

Zofia took them into her home. 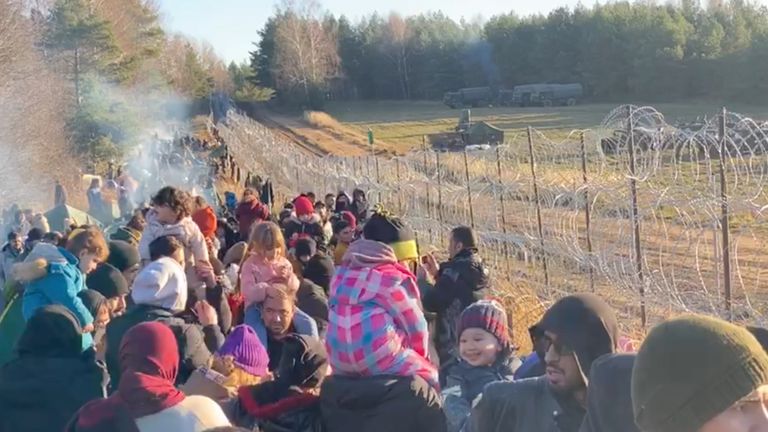 “What else could I do?” she asks seemingly more to herself than to me. She said she took them in, allowed them to have a bath and gave them dinner. They stayed for three nights.

Zofia said after they rested and regained their strength, they left. They asked her hundreds of times not to call the police. She didn’t.

She said she knew that sooner or later they would get caught.

But she gave them her phone number and the woman she had helped called when she was picked up by the Polish authorities.

Now Zofia is here to see her again, offering compassion to someone in a desperate situation. And she tells me she will continue to visit the woman as she is likely to be in the centre for some time.

Zofia is not alone in Poland in a desire to help some of the thousands attempting, some succeeding, getting into a European Union nation.

Close to the border with Belarus at night, some houses flash green lights as a signal to migrants and asylum seekers that they are welcome.

Aid agencies are doing what they can to assist people who’ve made it to a no man’s land of forest between the two nations, despite the Polish government imposing legal restrictions preventing journalists and humanitarian workers from getting close to the border. At a centre in the city, we meet asylum seekers from Syria, Afghanistan, Iraq and other nations who are being offered help making their claims to stay.

All have been through trauma to get here. Many told us they endured days, sometimes weeks, of being pushed between the border guards of different nations. Many allege they were assaulted by multiple authorities.

We meet 29-year-old Thaer Rezk from Homs in Syria. He tells us an extraordinary story of crossing from Belarus into Poland, being beaten and pushed back, being driven to Lithuania and being pushed back again before a Belarusian guard cut the wire fence to Poland letting Thaer and his friends through.

He tells us that they hid in the freezing forest for days and nights, struggling with the injuries inflicted by the beatings they endured. He said he was assaulted by border guards in every nation he ended up in.

He added: “In Belarus, he (the guard) kick me on my chest. I can’t breathe. He kick my friend in face. His eye is gone. He beat us like this”.

In Lithuania, he said: “The commandos are not good. It’s very hard and very bad. He beat us for three hours. Very bad. Beat us. He put electric shock on my neck, on my foot.”

At the same centre, we meet an Iraqi mother, Haneen, who insists we protect her identity. She is pregnant with her fourth child and fled the violence at home with her young family.

They travelled to Belarus and waited at the border before moving towards Poland, having to survive in the freezing forest for days.

She said: “Our situation was really, really difficult. All we had was a little bit of water left in a bottle and I had to share it amongst my children. Me and my husband wouldn’t drink. So nothing would happen to them, so they wouldn’t die”.

She recalled: “After we crossed the fence in Belarus and we entered Poland, we waded through water – which reached up to here (she gestured to her chest) – after that we walked for hours, drenched and surrounded by animals and I don’t know what.

“We kept walking for three days until we reached an area where the police found us and brought us here.”

She is optimistic that her life and that of her children will now be secure in Poland or another EU nation.

But thousands more share that aspiration and the Polish government is taking a hard line at the border. The hopes of all who head in this direction are unlikely to be met.

Zelenskyy ‘not interested’ in meeting ‘nobody’ Putin for peace talks
Razor EcoSmart Cargo review: A clever 2-seater e-scooter, but with some problems
Flybe: Will I get a refund for my flight?
Awesome Alibaba: Low-cost backyard construction equipment, batteries included
Sunak urged to ‘come clean’ over what he knew about Zahawi tax scandal