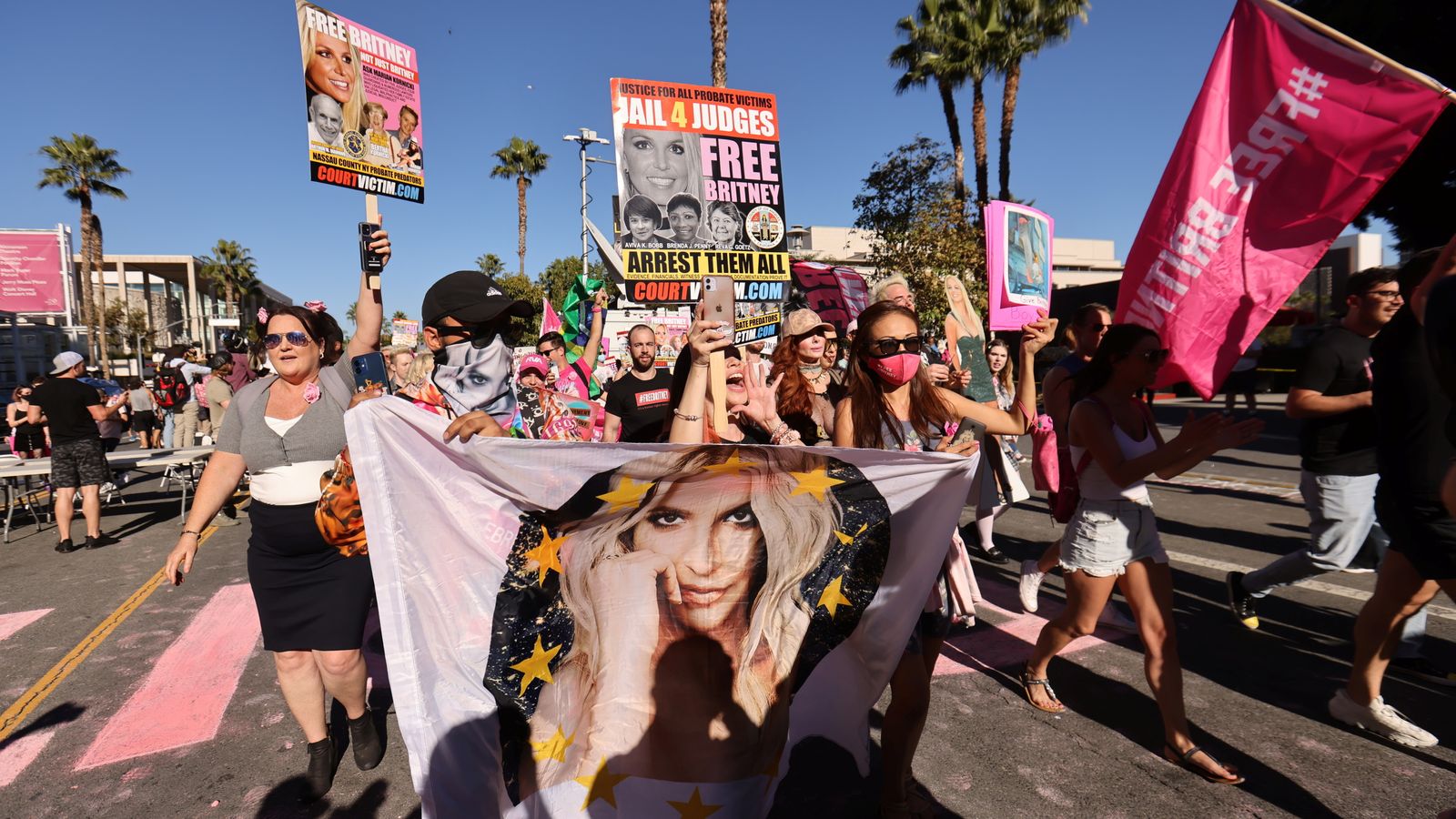 Pink confetti was propelled into the clear blue sky and the speakers blasting Britney Spears’ greatest hits cranked up a notch as news filtered through to supporters outside court that her 13-year-long conservatorship was over.

Shrieks filled the air and some even cried tears of joy and relief.

Megan travelled from Chicago to Los Angeles in the hope that the conservatorship would be terminated.

“I’m just so happy, it’s been so long and now she’s finally free, she can live her life,” she said.

Throughout the morning with anticipation building ahead of the pivotal hearing, fans marched along the palm tree lined street outside the Stanley Mosk courthouse, placards held aloft.

“It’s her circus so why isn’t she the ringmaster?” was written on one. “This is a human rights issue, free Britney now!” on another.

Four women dressed in iconic outfits from some of Spears’ most famous music videos performed a dance routine on a stage erected for the occasion.

For the past two and a half years the Free Britney movement has brought energy, colour and a shared sense of outrage to the cause, as they campaigned for their idol to be released from her conservatorship.

“She is being held prisoner,” said one, “she’s not even allowed to go out to get a coffee.”

The most hardcore fans have become experts in the workings of the conservatorship system – an extreme legal arrangement for people deemed unable to make decisions for themselves, usually those with dementia or other mental illness.

It took less than 45 minutes for Judge Brenda Penny to reach her decision that this no longer applied to Britney Spears.

Inside court, the rows were packed with journalists and members of the public. “No phones, no electronic devices” bellowed the court bailiffs, after recordings of previous hearings had been leaked online.

“Ms Spears believes the time has come to terminate this conservatorship,” he said. He read out excerpts from her previous testimony where she told the court, “I just want my life back”.

Britney’s father was dialled into the hearing, as was her mother Lynne Spears. Their lawyers also said they agreed the conservatorship should end.

Judge Penny heard no opposition, and determined that the conservatorship of the estate and the person should be terminated, as it was “no longer required”.

A decision that had garnered such international attention, and one that would mean so much to the hundreds of fans gathered outside the court, in the end, felt inevitable.

Only a couple of administrative powers remain for her temporary conservator John Zabel, like transferring the power of attorney to her trust.

Mr Rosengart said outside court that this was not the end of the story, telling Sky News that Spears would now have to decide whether to pursue her father Jamie in the courts.

Jamie Spears, as the conservator, controlled his daughter’s estate and personal affairs for 13 years and says he only ever had her best interests at heart.

But Spears says he abused his position and she wants access to full financial records for the whole contested period of the conservatorship.

The termination of the conservatorship is a life-changing decision for Spears. Once the dust has settled, she may return to the stage but this time it will be on her terms.