One of the only facilities in the world that uses carbon capture and storage technology to reduce the emissions of hydrogen production has the same carbon footprint as 1.2 million petrol cars, according to a new report seen exclusively by Sky News.

In a first-of-its-kind investigation into the plant, which is owned and operated by Shell, the lobby group Global Witness claims that it has emitted far more greenhouse gas than it has captured.

While it has prevented five million tons of carbon dioxide from escaping into the atmosphere since 2015, it has released a further 7.5 million tons, the group said.

Using carbon capture and storage (CCS) alongside hydrogen production is known as ‘blue hydrogen’ and has been much championed by governments and the energy industry alike as vital to the green transition.

Although Shell publishes its broader emissions annually and reports these site specific emissions in technical reports to Canadian authorities, they have not been included in any public-focused communications, which report authors say amounts to Shell “not telling us the full story.”

The plant in question is located in Alberta, Canada and is part of Shell’s Scotford refinery, where hydrogen is produced for use in refining bitumen – a type of oil sands.

‘Quest’, the CCS facility, was added in 2015 as part of a project to test the capabilities of the new technology.

As Quest was, in effect, ‘retrofitted’ to an existing plant, it doesn’t cover the emissions from the entire facility.

The report found that this facility captures just 48% of its on-site carbon dioxide emissions.

Once you include other emissions, such as from the fossil gas supply chain, only 39% are captured.

Despite this, the plant has been subsidised by the Canadian government to the tune of $US654m.

“Shell says that its carbon capture system at this project in Canada is an effective tool for reducing carbon emissions.

“Carbon capture is definitely part of the problem. Because it has a history of failure, almost 80% of government funded large scale, carbon capture projects have failed over the years.

“Instead of investing in this dirty, climate-wrecking fuel, governments should promote and boost investment into renewable energy sources like wind power, solar power, that can take us to a genuinely more sustainable future and a safe climate for all.”

Hydrogen production has existed for many years, but it has become a popular fuel amid the push to net zero as it emits no greenhouse gasses at the point of consumption. 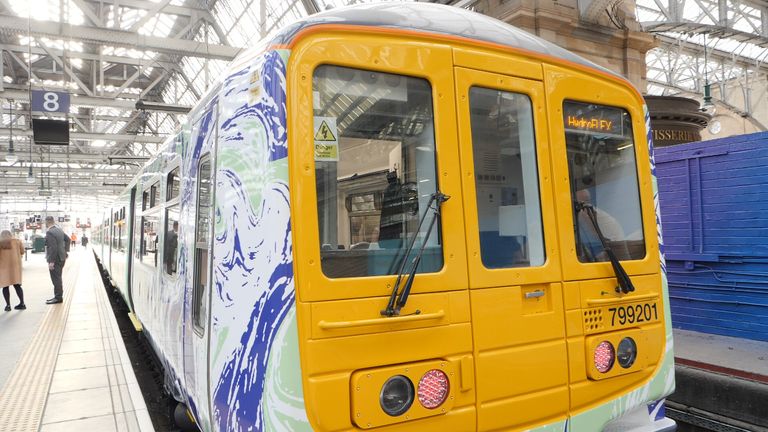 All aboard the UK’s first hydrogen-powered train

However, it is predominantly produced using fossil fuels in a process that emits greenhouse gas – this is dubbed ‘grey hydrogen’.

While there are a few examples of it being produced using renewable energy (‘green hydrogen’), at present this is much more expensive.

‘Blue hydrogen’ has therefore been touted as a good solution in the immediacy, as it is a cleaner technology that can be scaled quickly and comparatively cheaply.

There are only a handful of facilities globally that use CCS with hydrogen production and there are none which currently deploy the most modern ‘gold standard’ purpose-built technology.

This newer technology is being designed to capture emissions from all stages of the hydrogen production process and not just a section of it, as is seen at the moment. Experts say it could capture as much as 97%.

Shell itself is planning to build such a facility at the Scotford refinery in a project called ‘Polaris’.

Some sections of the energy industry argue that it is this technology that should properly constitute the definition of blue hydrogen.

A Shell spokesperson said of the report: “This analysis is simply wrong. Our Quest facility was designed some years ago as a demonstration project to prove the underlying CCS concept, while capturing around a third of CO2 emissions.

“It is not a hydrogen production facility. The hydrogen projects we’re planning – like Polaris – will use a new technology that captures more than 90% of emissions. Global Witness are comparing apples with pears.”

But independent experts say facilities like Shell’s are examples of blue hydrogen and it is right we should learn lessons from the technology and heed warnings about the emissions.

“If you capture what we call the ‘process emissions’ only you might be capturing roughly half the C02 emissions.

“[But] It demonstrates how to go about many elements of the system. Not only capturing the carbon dioxide but also cleaning it up, compressing it, transporting it and storing it. And from that we can learn how to go to the much higher capture rates.”

The debate over blue hydrogen is prescient because there are a number of plans underway to build facilities in the UK, and blue hydrogen also has a central role in the UK government’s strategy.

All UK-based proposals plan to use the most modern iterations of this technology with high capture rates.

One of them, led by energy firm Equinor, plans to develop what it calls the UK’s first “at-scale” blue hydrogen facility.

The project, called Hydrogen to Humber Saltend (H2H Saltend), will provide the beginnings of a “decarbonised industrial cluster” in the Humber region and is part of a larger move to provide clean energy to vast swathes of industry in the North East.

The project is also expected to create tens of thousands of jobs.

“I think that we should be incredibly proud of these opportunities, this will really create an international spotlight on these industrial regions,” explained Dan Sadler, Equinor’s UK VP for low carbon solutions.

While critics say it is wrong to be investing in technology that still requires the burning of fossil fuels and the money would be better spent on scaling entirely renewable sources, he argues blue hydrogen is a practical, positive solution now.

“What we need to be able to do is start the hydrogen economy and we need to start at a scale that can justify the infrastructure.”

“You can’t jump to utopia, you have to step there. We may all agree that in the longer term an entirely self-sustaining green hydrogen market may be the ultimate panacea.

“But the reality is that the climate emergency is now, we need to be making tangible impacts on climate change obligations.”

Global Witness and others point out that carbon capture rates alone are not enough to assess the carbon footprint of any such sites as they don’t include the emissions from the fossil gas supply chain and other related activities.

The UK government is set to introduce a ‘low carbon hydrogen standard’ to ensure that sites being developed are low emissions although the exact rate of that standard has yet to be decided.

Big Oil braces for shareholder revolt over climate plans in proxy voting season
Fiido Beast review: Watch this powerful electric scooter turn into a hilarious 2-wheeled go-kart!
Keeping Illinois nuclear plants open is saving some customers $237 a year on average
Business secretary writes to fuel giants reminding them to pass on tax cuts to motorists
How much did the partygate inquiry cost and which events broke the rules?