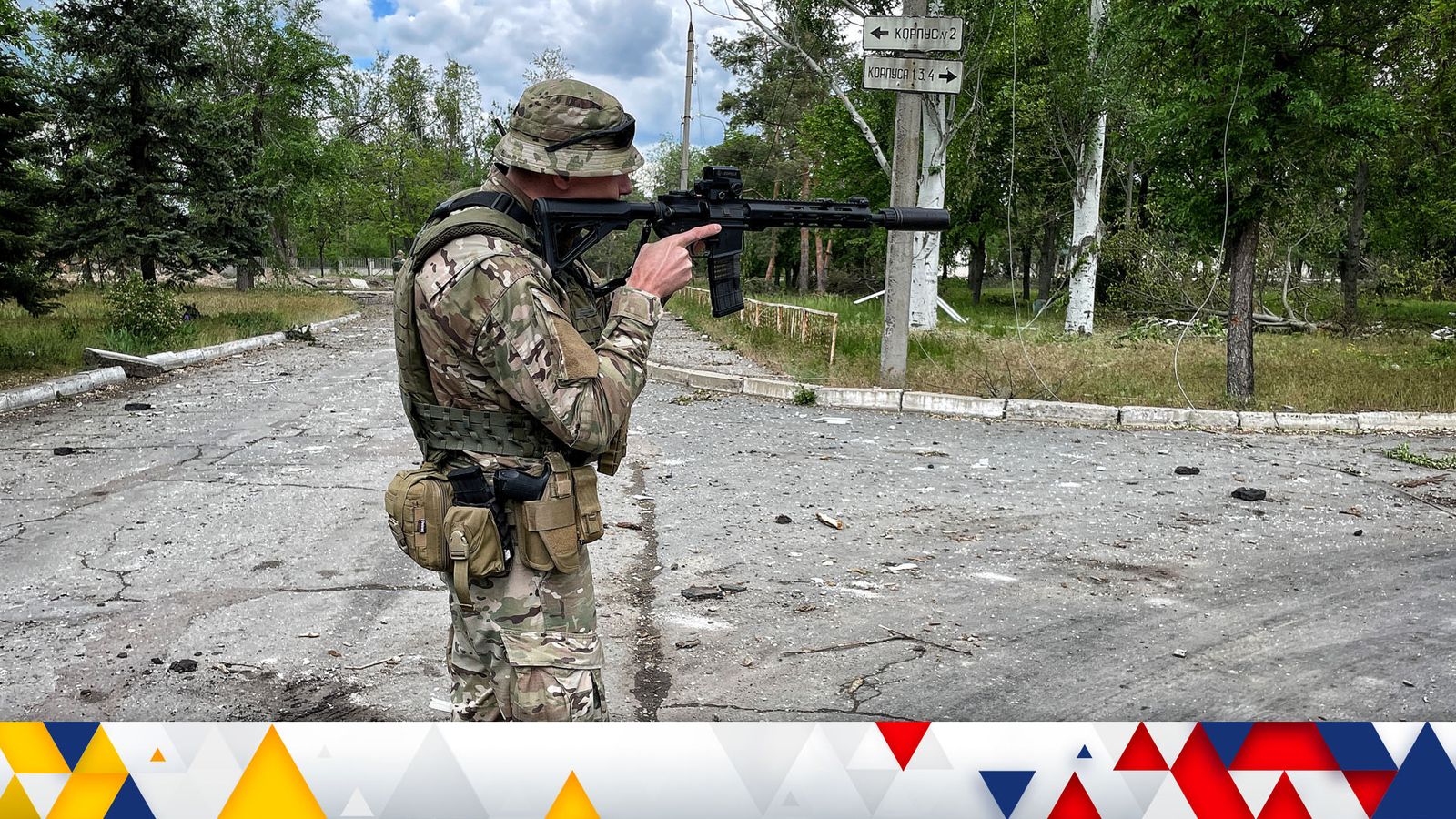 The road to Severodonetsk in Ukraine has to be negotiated at a furious pace.

The route incorporates a vast open stretch of land leaving vehicles exposed and vulnerable to attack.

The journey is pitted with risks as the Russians try to cut off this, the only route into the city and the one remaining pocket of Ukrainian resistance in the war zone, which is now Luhansk – the smaller of the two areas making up the Donbass region – and which the Russians appear set on seizing.

We see upturned and burned vehicles dotted along the route: evidence of this fresh Russian aggression.

Their military failures elsewhere – in Kyiv and Kharkiv – has made victory here in the Donbas, apparently more crucial.

The Russians have all but taken Luhansk, bombing it relentlessly and claiming control over vast swathes of it.

But Severodonetsk is the city now standing in the way of the invaders moving into the second half of Donbas… and Donetsk.

The industrial city, which was once home to about 100,000 civilians, is mostly emptied as residents have fled to try to find safety elsewhere – shelled and rocketed into running for their lives.

But there are an estimated few thousand civilians still here… despite the constant boom, boom, boom of rockets and artillery.

‘This is my home’

We’re with the Luhansk chief of police Oleh Hryhorov, who’s doing his best to try to persuade some of those still holding out to come with him to an area where the Russians are not concentrating their firepower – not yet, anyway.

But an elderly woman called Maria whose eyes are red and swollen from the constant crying is still refusing to leave despite clearly being terrified of the barrage of noises which vary in intensity depending on how close they are to the home where she is sheltering.

A family is busy saying their last goodbyes, sobbing into each other’s arms. They’re wondering when or if they’ll ever see each other again.

A father is sending his mother-in-law and his teenage daughter out of the city.

He appears stoic but flinches as the whistle of a rocket sounds far too clearly, again, followed by a terrifying crunch as it lands nearby.

“That was close,” he says as he tries to cook what looks like some vegetable soup on an open fire outside.

The residents have been cut off from the outside for weeks and weeks now in the most difficult of circumstances with no power, no communications network and no running water operating in this city.

The residents have been getting some aid supplies driven in but the route is becoming more and more treacherous. Yet, they’re taking each day one by one.

There is no other option. Many talk of their responsibilities to their older relatives, how they refuse to leave and cannot be left to fend for themselves in Severodonetsk where the Russians are gradually inching forward.

The Ukrainians have tried to slow the Russians’ progress…..by planting mines and blowing up the last railway bridge connecting the now Russian-held territory with Severodonestsk.

But the explosion is proving to be only a temporary setback as it hasn’t stopped the Russians from continuing their onward march through the Donbas.

Suggestions mooted by European politicians about conceding Donbas to arrest the war are met with disdain and outright disgust by those living in the region.

“Why would we do that?” says police chief Hryhorov.

“This is our earth. Our land. Our homes. It’s like someone coming to your home where you live and where your family is and saying, no! It’s ours now. You would fight for your home, your family.”

Giving up is not an option.

He takes us to the only working hospital in the city. It’s where my Sky News colleague Alex Rossi and his team were a little more than three weeks earlier.

There’s been a sharp deterioration here since. The main hospital building is scarred with burns from fires caused by rocket explosions and has clearly been hit – more than once.

The medics are having to move the patients constantly to try to protect them from the blasts. And there are still about 40 patients continuing to need treatment.

There is unexploded ordnance scattered in between the hospital buildings and the front of one block is a mess of broken glass and crumpled metal. Yet the attacks keep on coming.

Targeted attacks on hospital, medics and civilians is a war crime under international law.

Read more:
Key battlegrounds in the Battle of the Donbas
US tells allies to move ‘heaven and earth’ to send more weapons

Many of the patients are in beds stacked up along the corridor walls – to shield them from blasts which might send dangerous shards of glass everywhere.

They’re being looked after by a young woman who said she was the only doctor left on site, leading a small team of medics.

Yet Dr Yulia Kisel insists she will remain here, helping her mostly elderly patients, until they no longer need her. “I will stay with my patients,’ she vows, “As long as they’re here, I’ll stay here.”

The Ukrainians are going to mount a fierce counter-offensive if they’re to hold back the Russians here. We leave to the same sound which accompanied our arrival… a fresh barrage of artillery attacks.

Our Solar System Likely to Remain Stable for the Next 1,00,000 Years, Study Says
Government considering 50-year mortgages that could pass down generations
Premier League footballer arrested on suspicion of rape
Tory whip resigns over groping allegation after ‘drinking far too much’ on night out
Mother, stepfather and teenager sentenced to life for murdering five-year-old boy