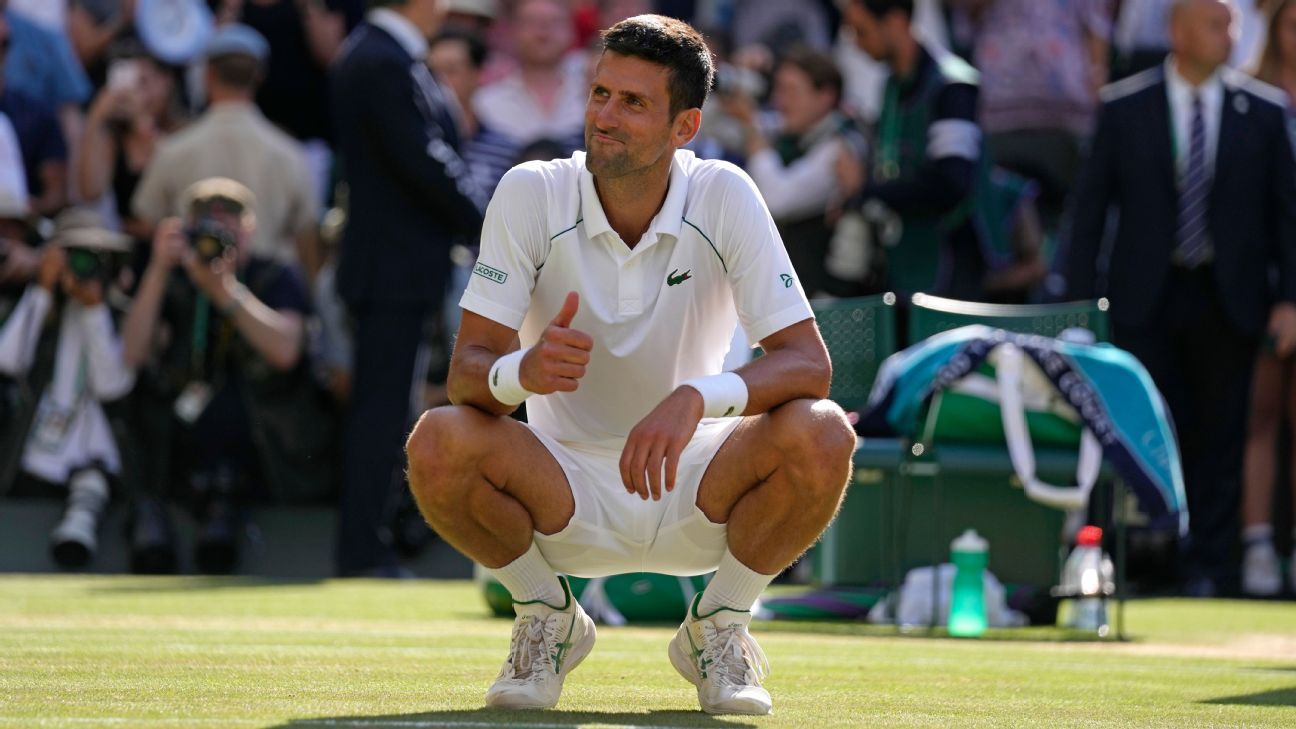 LONDON — Novak Djokovic kept his cool in the furnace of Centre Court to win his seventh Wimbledon championship against Nick Kyrgios. As Kyrgios stuck the ball in the net on championship point, Djokovic looked to his team and let out a massive exhale. The triumph sees him go one behind Rafael Nadal‘s record of 22 men’s singles titles.

In a match where Kyrgios grew increasingly frustrated with interruptions and his own team, Djokovic stayed calm in balmy temperatures to see off Kyrgios in four sets 4-6, 6-3, 6-4, 7-6 (3). This was Kyrgios’ first singles Grand Slam final, while it was Djokovic’s 32nd and eventually experience won out.

In a much-anticipated match, Kyrgios stormed through the first set in just 31 minutes to win 6-4, with Djokovic finding it hard to read the Australian’s serve. But then Djokovic found his rhythm, lowered the tempo ever so slightly and got a foothold to take the second set 6-3 – proving to be the turning point in the match.

Kyrgios grew visibly more frustrated during the third set and asked the umpire to remove a spectator who Kyrgios claimed had “drunk 700 drinks, bro” and was talking to him during the point. Kyrgios also frequently directed frustration towards his team, as Djokovic largely kept his cool. He broke Kyrgios in the ninth game, and then served out to go 2-1 up. In the fourth set after an almighty effort from both, it went to tiebreak. Djokovic got the read on Kyrgios’ serve to win the tiebreak with the third championship point.

This triumph moves Djokovic level with Pete Sampras and William Renshaw on seven at Wimbledon, and one short of Roger Federer‘s record eight single’s championships. Here’s how the men’s singles final went down on Centre Court and how Djokovic kept his cool as Kyrgios lost his.

Djokovic does not have the reputation for being the best returner in the game for nothing. The man is a machine. But in that first set he really couldn’t get hold of Kyrgios’ serve – which included a second serve ace at 125mph in just the second game of the match. Kyrgios dropped just five points on his serve in the first set to storm through. That meant Djokovic had lost a first set on grass for the third match running at Wimbledon – just the third time in his career on grass this had happened. But Djokovic is well-versed in turning things around, and he soon got a handle on Kyrgios’ serve.

Kyrgios had won both of their previous meetings ahead of Sunday’s final – and Djokovic had drawn just one break point opportunity in those two matches. But he broke Kyrgios once in the second and third to get a foothold. It was truly remarkable given Kyrgios was managing to keep over 70% of his first serves in, but Djokovic managed to get a handle on them at the at the key moments. This included the tiebreak where he broke Kyrgios’ serve three times to allow him to serve out for the championship

THAT’LL DO IT!@DjokerNole defeats Nick Kyrgios in the tiebreak to win the #Wimbledon championship! pic.twitter.com/VojQ4mHLN5

Djokovic told us on Friday to expect “fireworks” in this match and while there were no on-court flashpoints between the two players, it did not want for drama. They spoke of their new blossoming “bromance” in the build-up to this match, and there wasn’t really a bad moment between them during the contest but Kyrgios was still vocal as the match progressed as he turned on the umpire, a spectator and his own team.

When Kyrgios missed his chance to break Djokovic at the end of the second set – surrendering three set points – he increased the chat towards his box. He was growing increasingly frustrated at how the match was developing, and the chat continued into the third set. At one point he said to his box “I don’t understand it! Why?! I don’t get it”, then followed it up with “I’ll hit a 130 (mph) second serve, that’s what I’ll do”. He followed it up by throwing down an ace. He was also given a warning for an “audible obscenity” during this set, and all in front of the eight-year-old Prince George, who was sitting in the front row of the Royal Box alongside the Duke and Duchess of Cambridge.

He was also angered by a spectator who he said was talking to him during points. He complained about them to the umpire, saying: “Why is she still here? She’s drunk out of her mind.”

And there was his own team, who he was fuming with as the third set progressed. “I can’t do anything, do you guys care or what? Doesn’t feel like it. Do you know how difficult it is to ace a guy three times?!” This continued into the fourth, with Kyrgios shouting at his box in the tiebreak, “what are you scared for?!”

It was the third set where the momentum shifted behind Djokovic. Kyrgios’ frustration continued into the fourth set with several incorrect line calls going against him, and at one point he said to the umpire “You’ve done no decent overrules in three hours”.

The battle to be the ultimate men’s GOAT

Djokovic sits on 21 men’s singles Grand Slams, just one behind Rafa Nadal on 22. Nadal has always brushed aside the significance of emerging from this golden generation with the most Slams out of him, Djokovic and Roger Federer. But Djokovic has frequently spoken about wanting to be out ahead of the rest. But given his vaccination stance, that makes life difficult for Djokovic and the next couple of Slams.

He is currently not allowed to travel to the U.S. due to not being vaccinated against COVID-19, while Australia issued a three-year banning order after he was deported back in January. That means he’s unlikely to play another Slam until France next year, on his least favorite surface. Aged 35, judging by his competitors, Djokovic still has a handful of years at the top ahead of him, but the opportunities to rack up the Slams are slowly ebbing away from him.

But what’s not in doubt is his current hold on the Wimbledon title. Kyrgios spoke about the importance of experience here – and how while this was his first Grand Slam, Djokovic knows every blade of grass and how to navigate the sport’s biggest occasion. He said this’d give Djokovic the advantage and he was proven correct as Djokovic won his fourth title on the bounce.

Djokovic has won his last 39 games on Centre Court, and his winning run stretches to 28 matches here (the two losses in 2017 and 2016 both occurred on Court No. 1). He has reiterated his love for Centre Court throughout the last fortnight and the next time we see him holding a Slam may well be this time next year. By that point Nadal will have had three opportunities to stretch out in front, while Federer is still in the midst of his comeback.