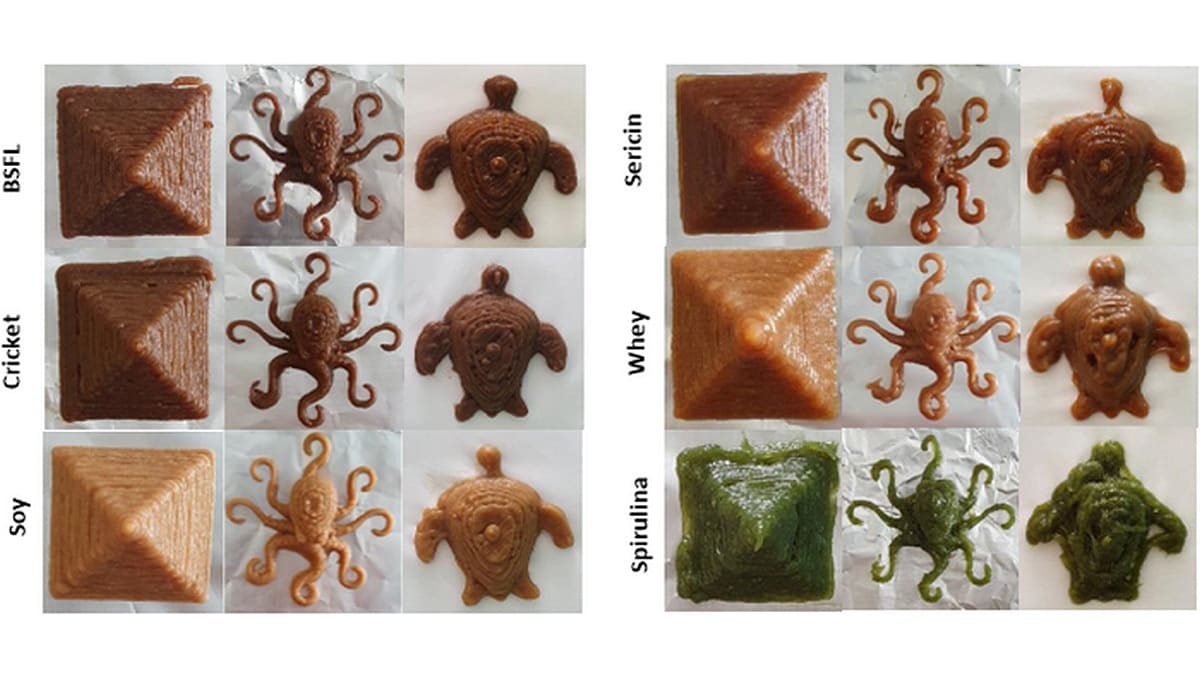 Future food supply concerns were the focus of a team of Singaporean academics, who eventually chose to generate them using 3D printing. The need for foods high in protein is anticipated to grow as the world’s population ages and expands, raising concerns over rising greenhouse gas emissions, and increased water and land use associated with conventional methods of raising animals for food. People have already started using alternate sources of proteins from plants, algae, and insects in several regions of Africa, Asia, and South America to produce nutrient-dense, sustainable food.

However, some people might find it strange to eat things like algae and bugs. To make eating insects a little more appealing, the research team developed a novel method. To modify the flavour, they opted to blend the crickets or larvae with more widely consumed veggies like carrots.

In order to effectively include alternative proteins in food inks, researchers from Singapore University of Technology and Design (SUTD), Khoo Teck Puat Hospital (KTPH), and the University of Electronic Science and Technology of China (UESTC) worked together on this project. By limiting the number of experimental runs, the study team minimised time and resources while optimising protein inks.

Professor Chua Chee Kai, the co-author from SUTD, said that for many people, the look and flavour of such alternative proteins might be unsettling. Kai added that 3D food printing can change how food is presented and go beyond consumer inhibitions.

For instance, to provide a more recognisable flavour, typical foods like carrots can be combined with alternative proteins like crickets. A 3D food printer can then extrude this blend of carrots and bugs to produce a dish that is both aesthetically pleasing and delicious.

The study was published in Food Hydrocolloids.

The team of researchers optimised the protein ink compositions with three variables—carrot powder, proteins, and xanthan gum—using the central composite design approach. In addition to flavour, nutrients, and colour, carrot powder assisted in giving the inks it was used to create mechanical strength.

Alternative proteins may eventually replace animal proteins as the primary source of protein consumed by humans, according to Prof Yi Zhang, the principal investigator from UESTC. This study suggests an organised engineering strategy for improving food inks, making it simple to create and customise aesthetically beautiful, flavourful, and nutritionally adequate food boosted with non-traditional proteins.

Serial killer may be on loose in California after police link spate of shootings
Tory conference is shrouded in gloom – has Truss already sealed her own fate? | Beth Rigby
Truss sticks by plan but admits mistakes, and says top-rate tax cut was chancellor’s idea
Boy charged with murder after fatal stabbing of 14-year-old
After only 28 days, Truss has had the worst possible start – can she win back control? | Beth Rigby