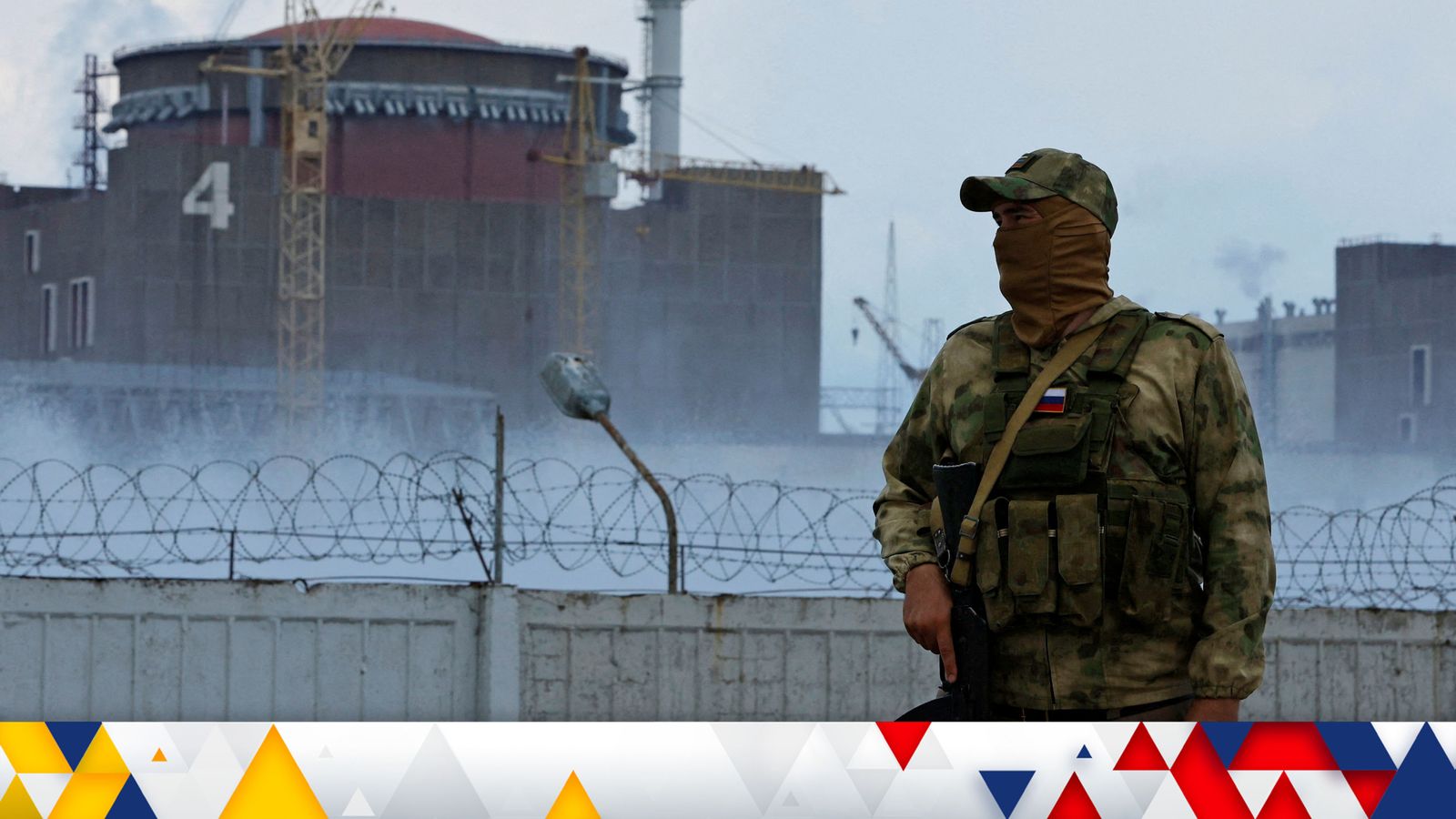 Ukraine has said Russia is preparing to stage a “provocation” at Europe’s biggest nuclear power plant on Friday.

The country’s intelligence agency made the claim just hours after Moscow accused Ukraine of trying to stage an “accident” there, which may involve a radiation leak, during the UN secretary-general’s visit to the war-ravaged nation.

Located in the southeast of Ukraine, the Zaporizhzhia plant was captured by Russia in the early days of the war and in recent weeks has repeatedly come under fire.

Both sides have pointed the finger at each other for the shelling.

Russia’s defence ministry claimed Ukraine would stage a “minor accident” and “provocation” – and blame it on them – to coincide with Antonio Guterres’ trip.

And Ukraine’s defence intelligence agency said it had information that staff with Russia’s Rosatom nuclear company had left the site and that the facility would be closed to everyone except for operational staff.

NBC News, citing Ukrainian intelligence, reports that workers at the plant have been told not to show up to the facility on Friday.

The UN chief is expected on Friday to visit the Black Sea port of Odesa, where grain exports have resumed under a UN-brokered deal.

He met Ukraine’s President Volodymyr Zelenskyy and Turkey’s President Recep Tayyip Erdogan in the western city of Lviv during his visit on Thursday.

What was discussed at the meeting?

The trio discussed efforts to de-escalate the war, speed up grain exports and the Zaporizhzhia nuclear situation.

Following the meeting, Mr Guterres called for the demilitarisation of the power plant and said he was gravely concerned about the situation surrounding it.

“The facility must not be used as part of any military operation. Instead, agreement is urgently needed to re-establish Zaporizhzhia’s purely civilian infrastructure and to ensure the safety of the area,” he said.

Ukraine’s president added that he had agreed the parameters for a possible International Atomic Energy Agency mission to the plant.

Mr Guterres has urged an end to fighting near the power station and the head of Russia’s chemical and biological defence forces, Igor Kirillov, claimed back-up support systems had already been damaged by shelling.

He said any accident would mean radioactive material reaching Germany, Slovakia and Poland.

Russia’s defence ministry has also warned the plant could be shut down if shelling continues.

Russia’s warning of a Ukrainian staged attack on the Zaporizhzhia power plant on Friday is ominous.

Russia has a track record of “forecasting incidents” as cover for its own actions.

Analysts say the risk of a nuclear explosion at the plant, similar to what happened at the Ukrainian city of Chernobyl in 1986, is highly unlikely because of its modern construction and ability to withstand large impacts.

What is more likely, if fighting around the plant continues, is a radiation leak comparable to the more recent Fukushima disaster in Japan.

As a result, there is an increasing sense of urgency amongst world leaders, and it has become a focus of this war in recent days.

Ukraine wants the site to become a demilitarised zone; the UN secretary general supported that move today, when he spoke after meeting President Zelenskyy in Lviv.

Russia opposes it – their forces currently occupy the site and thus control power too much of southern Ukraine.

Effectively capturing and controlling Europe’s largest nuclear power station is a major coup for Moscow, so it is unlikely to cede that control easily.

Ukraine says it’s being used as a base to attack from, and that Russian heavy artillery is positioned in and around the power station – something the Kremlin denies.

Kyiv also claims that Russia has hit the facility itself in order to blame Ukraine for any power cuts.

Mr Erdogan said he discussed possible ways of ending the war during the trilateral meeting.

He added the three leaders discussed using the positive atmosphere created by a grain export deal in July to establish lasting peace.

After the meeting, Mr Guterres said 21 ships had departed from Ukrainian ports under the deal in less than a month, and 15 vessels had left Istanbul to load up with grain and other food supplies from the country.

Fears over the nuclear situation come as further deaths occur in the six-month-old war.

On Wednesday evening, seven people were killed and 16 injured in shelling in Ukraine’s second-biggest city Kharkiv, according to emergency services.

Another person died and 18 more were wounded early on Thursday in a separate residential area of the city, said regional governor Oleh Synehubov.

Meanwhile, in other battlefield developments, Ukrainian forces said they had killed 29 “occupiers” and destroyed artillery, vehicles and a supply depot near Bilohirka, northeast of Kherson – in southern Ukraine.

The chief of Russia’s Black Sea fleet has also reportedly been replaced following a number of blasts in Crimea in the past week, blamed on saboteurs.

Russia’s RIA news agency reported sources as confirming that Igor Osipov had been kicked out and replaced by Viktor Sokolov. If confirmed, it would be one of the most prominent sackings of the war.

It follows the humiliating sinking by Ukraine of the Kremlin’s flagship cruiser, the Moskva, in April.

British rocket launchers turning the tide against Russia filmed for the first time
Nuclear strike could become more appealing for Putin as options shrink
How to get the most out of Apple’s new AirPods
SpaceX Rocket With Next International Space Station Crew Enters Orbit, Including Russian Cosmonaut: All Details
Tory conference is shrouded in gloom – has Truss already sealed her own fate? | Beth Rigby