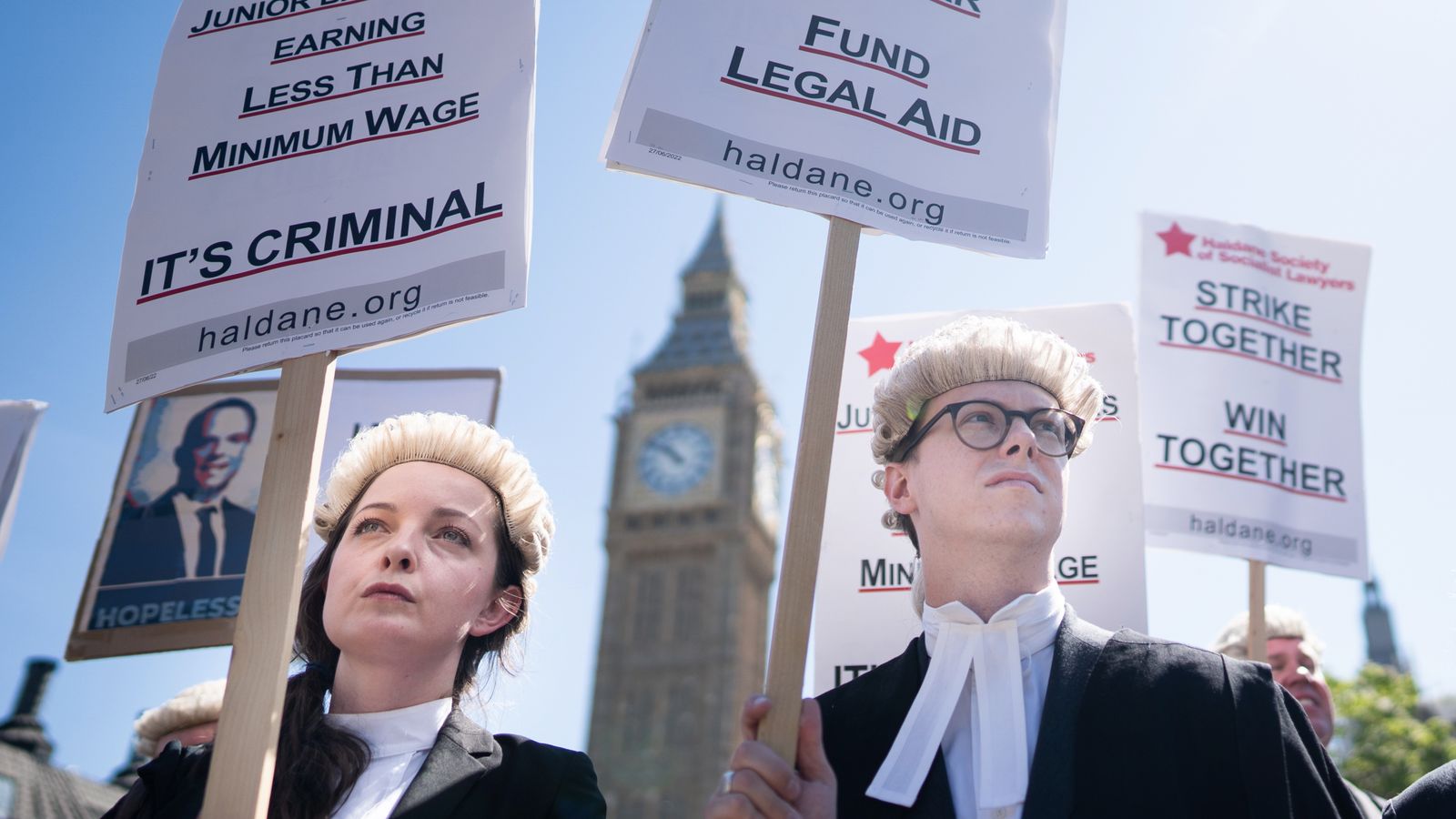 Criminal barristers in England and Wales have voted in favour of an escalation of strike action.

The Criminal Bar Association (CBA), which represents lawyers prosecuting and defending those accused of crimes in England and Wales, said its members had backed a plan to go on strike “on an indefinite basis” from Monday 5 September.

They join rail staff, teachers and civil servants in backing or considering industrial action over the coming months at a time when pay awards are lagging behind the four-decade high rate of inflation.

Read more: Who else is on strike this month?

The CBA has said its members have suffered an average decrease in earnings of 28% since 2006 – when taking inflation into account – and has accused the government of refusing to engage in negotiations “aimed at finding a fair settlement”.

Criminal barristers are due to receive a 15% fee rise from the end of September, meaning they will earn £7,000 more per year.

But there has been anger the proposed pay rise will not be made effective immediately and will only apply to new cases, not those already sitting in the backlog waiting to be dealt with by courts.

Criminal barrister Jennifer Devans-Tamakloe told Sky News that the 15% rise “does not come near” to the 28% cut in income during the last 16 years.

She said the 25% increase barristers are fighting for was “reasonable, justified, proportionate and necessary”.

“What we have to consider as self-employed individuals is that – I have come to Wolverhampton today, which is not my home court,” she explained.

“I pay my expense of getting here upfront. Nobody is helping me out with that.

“Now if you are going around the country as people from my chambers do, and people from many other chambers will do, you have to bear those costs upfront, you have to do all the preparatory work that simply isn’t covered by the fees you ultimately get at the end of proceedings.

“The government needs to understand the hardships criminal barristers like myself are facing.”

CBA members have been walking out on alternate weeks, but were balloted on whether to escalate the action.

The 14-day ballot closed at midnight on Sunday and the result was announced on Monday morning: 2,273 members cast their vote, with an overwhelming majority – around 80% – backing an uninterrupted strike.

“The remedy is for an injection of money into the backlog of cases, which currently stands at 60,000 cases, that barristers are working on that will cost the government only £1.1m per month,” she told BBC Breakfast.

“Currently, it’s costing much more for the courts to sit empty.”

Justice minister Sarah Dines said the escalation was “wholly unjustified” given the pending rise in fees.

But Labour leader Sir Keir Starmer, the former director of public prosecutions, accused the government of doing “absolutely nothing” to resolve such industrial disputes.

The Ministry of Justice (MoJ) previously said it had “repeatedly explained” to the CBA that backdating pay would require a “fundamental change” in how fees are paid, adding: “That reform would cost a disproportionate amount of taxpayers’ money and would take longer to implement, meaning barristers would have to wait longer for payment.”

The victims’ commissioner for England and Wales, Dame Vera Baird QC, said the action was “the latest symptom of a criminal justice system that is severely and recklessly underfunded”.

“It is victims who are ultimately paying the price and will continue to suffer the longer this goes on,” she said, citing a “dangerous shortage” of criminal barristers, with one in eight having left the profession in the past year.

“This is simply unsustainable, and it leaves our criminal justice system teetering on the edge.”

Read more: Adam Boulton on a summer of strikes

More than 6,000 court hearings have been disrupted as a result of the dispute over conditions and government-set fees for legal aid advocacy work, according to MoJ figures.

Data released under freedom of information laws show that during the first 19 days of industrial action – between 27 June and 5 August – 6,235 court cases were disrupted, including 1,415 trials.