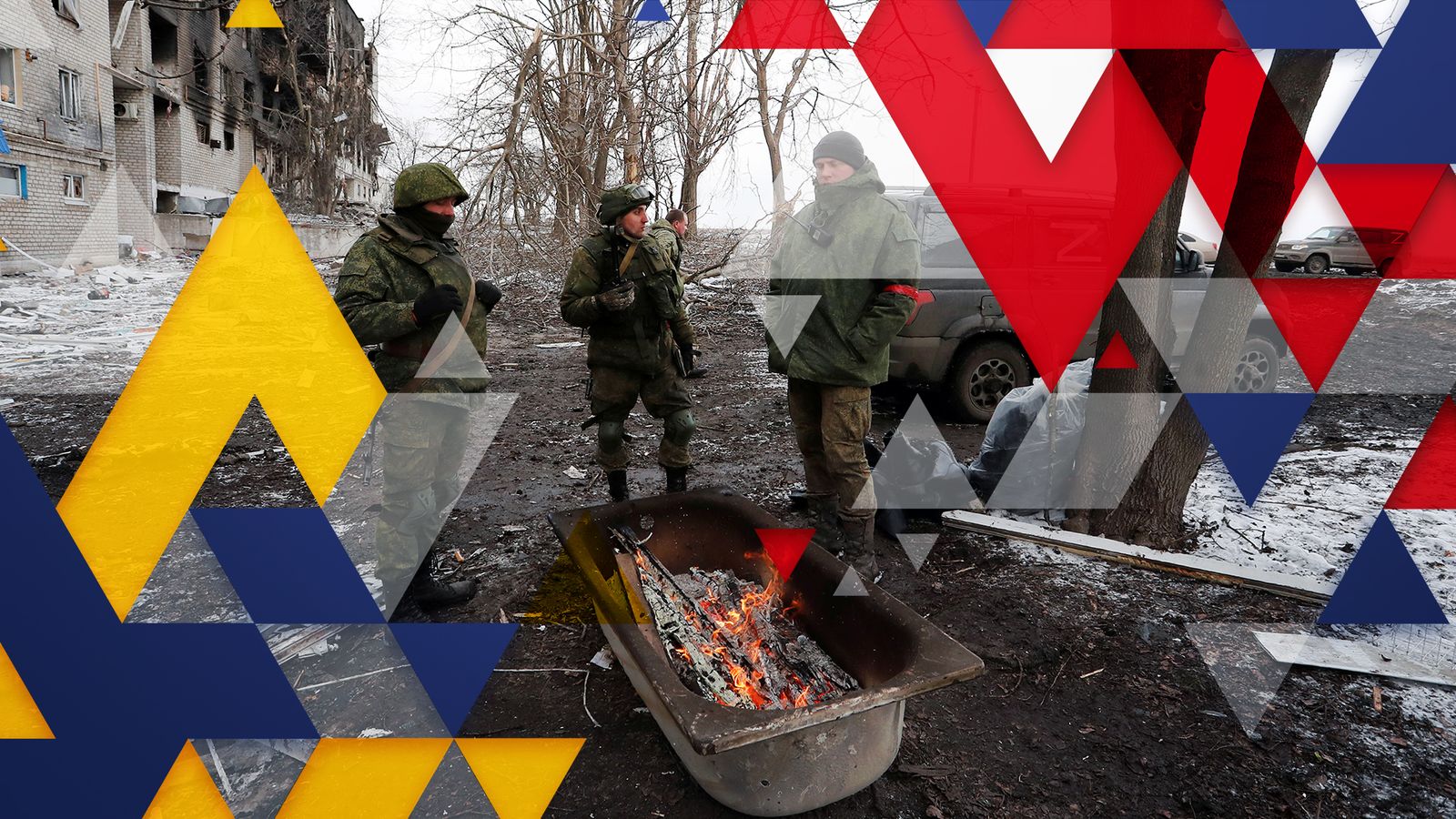 The war’s half-year point coincides with Ukrainian Independence Day, which in normal circumstances would see citizens celebrating 31 years of independence from the former Soviet Union.

But instead, curfews are in place in the cities of Kyiv or Kharkiv amid intelligence Moscow could use the anniversary as an excuse for fresh civilian attacks.

As we look ahead to several more months of war, experts have told Sky News the “pendulum is beginning to swing towards Ukraine“.

But a Ukrainian victory is dependent on numerous key factors, including how long the West is prepared to provide support and whether troops can make enough gains before winter sets in.

Here we look at what we can expect to see both on the ground in Ukraine and from the Kremlin in the coming months.

Over the past six months, Russia has gone from a Blitzkrieg-style offensive targeting Kyiv to focusing on the eastern Donbas and southern cities of Mariupol and Kherson.

While those areas suffered horrific losses, the Russians failed to achieve complete control.

With Mariupol decimated, the Ukrainians are now focusing on Kherson, the only major city the Russians occupy, in a bid to start pushing them back and blocking access to the Crimean peninsula.

“There’s a sense of Ukraine entering a third stage of the war.

“The first was surviving, the second was holding and the third is – with Western help – starting to push the Russians back around the southwest.”

But he cautions: “What they’re trying to do is very ambitious and a much bigger encirclement than the Russians have done.

“The pendulum is beginning to swing towards Ukraine, but that depends on a lot of ‘ifs’.

“If Western support continues, if the Russians are still struggling to recruit troops, and if Ukraine can successfully switch from defence to attack.”

Winter fast approaching and the global economic strain of the war will both add to the pressures on Ukrainian forces, he adds.

“December to March will be bitterly cold. If the Ukrainians don’t have some success in this new offensive now, they won’t be able to do it until next year.

“There’s also a lot of pressure to show their Western supporters they have started to make progress, because if the message starts to be that Ukraine will lose, they’ll stop supplying weapons.”

Read more:
Putin ally says daughter felt ‘like a warrior’ and ‘a hero’ before she was killed in car bombing
Cages put up in Mariupol concert hall for ‘show trial’ of prisoners of war condemned by UN

With the West now arming Ukraine with missiles capable of direct attacks on Russian supply lines – and even Russian soil, their enemy is in desperate need of more troops to keep up.

“They haven’t been able to make any significant tactical advances and that will remain similar for the coming months.” And while Ukraine has conscripted all men between the ages of 18 and 60, Vladimir Putin’s continued denials Russia is at war means he is unable to do the same, she adds.

“Calling it a ‘special military operation’ has its disadvantages for the Kremlin.

“They’re trying to recruit at a regional level, but they just haven’t got the numbers they need.”

Professor Clarke says that although some young Russians are being sent to the front line having never held a gun, it will be months before potential new recruits are fully trained.

“Even cutting every possible corner, training new people up will take a minimum of four or five months.

“That means they won’t really be able to increase their numbers until next year.”

Despite years of sanction-proofing, the longer the war, the worse the impact will be on the Russian economy.

Luke March, professor of post-soviet and comparative politics at the University of Edinburgh, says this means the Kremlin needs to “claim some sort of victory” in the coming weeks and months.

“There’s some flexibility on what that victory is, because he controls the media, he can come up with any old story and it won’t really matter if it’s believable or not.”

But he adds that the most likely choice will be trying to hold referenda on becoming part of Russia in occupied areas of Ukraine.

“The political aim will be trying to have referenda in Donetsk, Luhansk, but also Kherson and Zaporizhzhia.

“It will all be rigged, but if they can get at least one through without too much disturbance on the ground that is a victory Putin could claim.”

Professor March also stresses the domestic pressures on the Russian leader as time goes on.

“He’s very isolated and no one will dare bring him any bad news at the moment.

“But as the pressure grows there will be infighting within the Kremlin – and you’ll see people sacked or demoted.”

After a former Russian MP claimed the recent murder of Darya Dugina near Moscow was the work of a new resistance movement, Professor March said we may also see “a rise in underground opposition tactics”.

“No one has heard of that group and they may never hear of them again.

“But if you have a system that’s increasingly oppressive with no opposition, you’ll start to find small groups carrying out isolated attacks.”

He adds, however, that a “mass resistance movement” against Mr Putin is incredibly unlikely.

Will the West continue to arm Ukraine?

With the cost of living crisis threatening excess deaths in the UK this winter and most countries in the worst struggling with soaring prices triggered by the war, many question whether Ukraine’s allies in the West can afford to carry on sending arms.

Professor Clarke says that for the UK and the US it’s not a question of political will, but one of sheer capacity.

“It’s whether we’re physically able to do it.

“At the moment the weapons manufacturers simply can’t produce enough.

“We in the UK have already given them everything that we can easily give them.

“But the Western world is on the verge of asking itself whether we want to take up industrial warfare – and arm Ukraine to a level as if we were fighting ourselves.”

He adds that for countries previously more dependent on Russian energy – such as Germany and Hungary – the burden of sanctions may soon become too much.

“Politically, they’re all starting to waver and will continue to do so as sanctions bite.

“And that’s what Putin wants, to play a strong enough game with gas supply and price that those countries give up supporting Ukraine.”