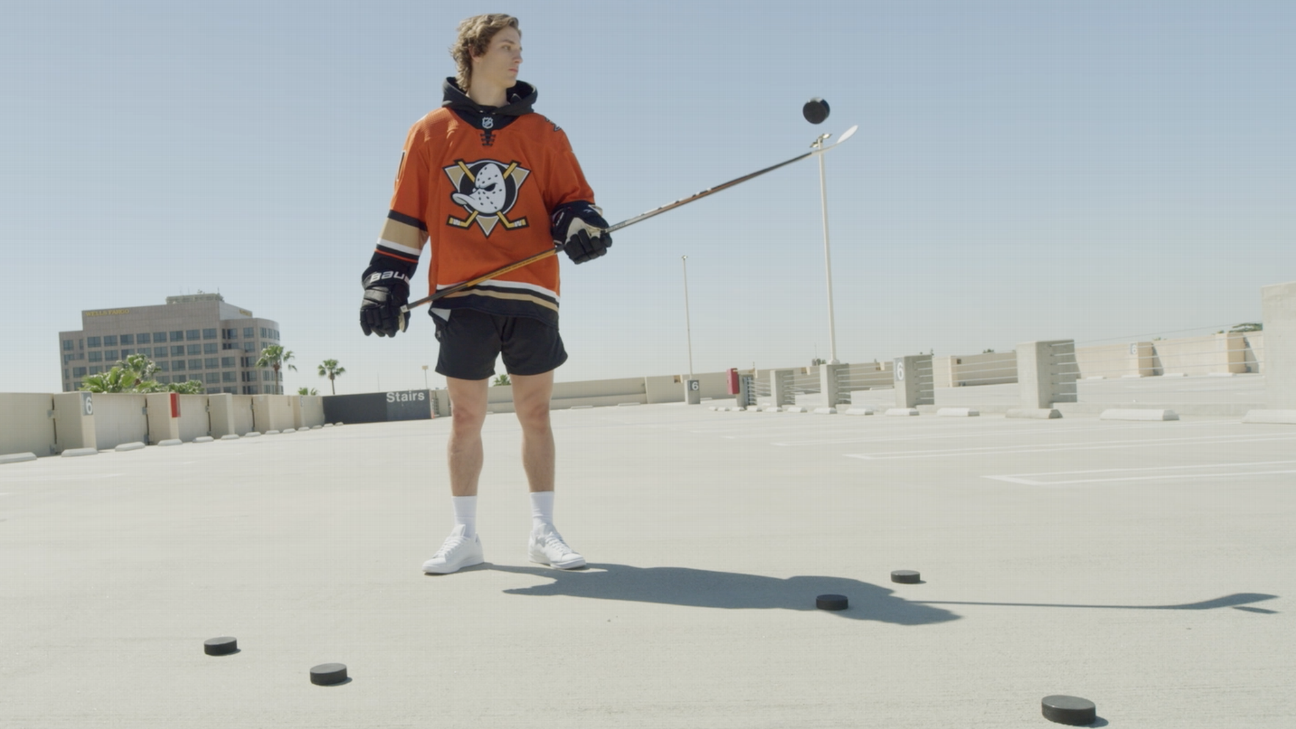 As a young hockey fan, Trevor Zegras would dream about pulling off video-game moves as an NHL player. Now he’s on the cover of “NHL 23,” a video game that features a move named in his honor that he made famous as an Anaheim Ducks rookie sensation last season.

“It’s weird. I mean, I grew up on this video game, right? Like, all me and my buddies would do is get together, pass the controllers around and play. It’s just a game that we all love,” the 21-year-old told ESPN recently. “It’s all kind of is coming full circle and I’m pretty excited about it.”

Zegras is one of two “NHL 23” cover athletes, appearing alongside Team Canada star Sarah Nurse. The game will be released on Oct. 14. He becomes the first Anaheim player to grace the cover in North America (former Ducks Teemu Selanne and Jonas Hiller were featured on international editions).

While appearing on the cover is surreal, having “The Zegras” officially added to an EA Sports game is beyond his wildest reveries. “I’m pretty excited about that. That’s gonna be pretty crazy,” he said.

For those who haven’t watched a highlight reel in the past nine months, “The Zegras” was a move that the Ducks forward pulled off in a game against the Buffalo Sabres on Dec. 7, 2021.

With five Buffalo defenders surrounding their net, Zegras moved the puck back and forth before lifting the disc onto his stick. Instead of attempting a lacrosse-style shot into the top corner of the net — another Zegras signature move — he instead lofted a pass over the goal cage and Sabres netminder Ukko-Pekka Luukkonen toward Anaheim teammate Sonny Milano, the lone offensive player in that herd of Buffalo defenders. Milano knocked it into the net for the NHL season’s most spectacular scoring play and a career-defining moment for Zegras.

It was the kind of highlight that broke through the hockey bubble onto every sports news highlight package and talk show, the kind of moment that captures the imagination of fans and fellow athletes alike. Not only were amateur hockey players attempting to recreate the pass in practices and games, but they were also finding ways to trick the EA Sports artificial intelligence to bring it into “NHL 22” action, recording their attempts on social media clips.

“I saw a bunch of videos of kids trying to create it,” Zegras said. “Almost like glitching the puck over the net, which was pretty cool to see.”

For years, the EA Sports tagline was “if it’s in the game, it’s in the game.” But just because something happens in an NHL game doesn’t mean it automatically ends up in their hockey video game.

“The Zegras” isn’t the first special move debate for the EA Sports production team. For example, the production team debated for years whether to add “The Michigan” lacrosse goal to the game, until so many NHL players started attempting the move that it felt more commonplace.

“If we had put that into our game five years ago, we probably would have heard from our players that it was ‘arcadey’ and not realistic,” said Sean Ramjagsingh, a vice president at EA Sports. “But now with the skill of these kids, they’re trying all these skills in real game situations. We’re less hesitant now because it’s part of the sport. Players see it as a legit way of scoring a goal. It’s become a feasible move in the world of hockey.”

In contrast, “The Zegras” is far less woven into hockey’s fabric. But others have attempted it and pulled it off, like Portland Winterhawks teammates Cross Hanas and James Stefan last season.

In the end, EA Sports felt compelled to add “The Zegras” to its 2023 edition both because of the mania surrounding the move and because so many of the game’s fans were attempting to recreate it digitally.

“Any time stuff that happens in the real world is capturing attention we’re going to try and get in the product. Plus the timing of him being one of our two cover athletes,” said senior design director Mike Inglehart, a Buffalo fan who unfortunately watched his team victimized on the iconic move in real time.

“Just another thorn in my side as a Sabres fan,” he lamented.

Having decided to add the move, the programmers had to figure out how players would pull it off — and at what degree of difficulty.

“Coming up with the controls was probably the most difficult part. Things don’t just drop in with a line of code,” Inglehart said. “Our deking system is fairly elaborate in terms of what’s in there. You have to have the players line up and have the right situation. And we had to make sure that it wasn’t something that becomes an epidemic, seeing ‘The Zegras’ over and over again.”

The EA Sports series prides itself on sticking to hockey realism. Hence, “The Zegras” is hard to execute, and could be made rare through the game’s programming.

“The deking system itself is geared towards more advanced players,” Inglehart said. “You have to do some dexterity work to pull it off so it can’t be abused. But there are ways to ensure that moves aren’t abused in the game, too.”

Zegras said he didn’t have any input on how the move was presented in “NHL 23.” He wasn’t asked to wear a motion-capture suit to digitize the play, either.

“We were thinking about it. I think when I was in Vancouver, I was talking to somebody about going in and trying it,” he said. “But I think they could find somebody else to do it for sure.”

Zegras said he plays the EA Sports NHL series “all the time,” with a crew of friends that are scattered around the continent. “It kind of keeps us well-connected, and I think that’s why the game’s so great. We shoot each other group texts and next thing you know we’re playing in the HUT and staying up late.”

When he’s not using the Ducks, Zegras said he’s playing as the Chicago Blackhawks. “That’s the Patty Kane fan in me,” he said. “I know, that’s the craziest thing, but I love being Chicago. I used to play as the Rangers a lot obviously, because I was a Rangers fan.”

Inglehart sees Zegras not only as a worthy cover athlete, but as the face of a generation of players who are bringing boundless creativity to the NHL — and influencing his games in the process.

“They’re doing stuff where you’re saying, ‘That should be in a video game first and in the NHL second,'” he said. “Who knows where it goes? There’s probably something that ends up in ‘NHL 24’ that we’re not even thinking about right now.”

It might even originate on the stick of Trevor Zegras.

This is the first summer Zegras has experienced as an NHL star. He can feel the difference walking into a restaurant or the gym, and especially any skating rink.

“Anywhere where there’s hockey a lot of little kids [recognize me], which is awesome,” he said. “It’s cool to interact with those little guys. Give them knuckles and take photos, sign stuff. I love all that stuff. So it’s good.”

It also marked the first summer when players selected in the NHL draft were citing Zegras as an inspiration for their ideal style of play, which is quite an accomplishment for a 21-year-old.

The last couple of summers have been off-kilter for Zegras, especially due to COVID interruptions to his schedule. He has been training for the season over the past several weeks, but also trying to reconnect with his social circle.

“I’m talking to a bunch of my buddies and kind of seeing what they’re doing and just trying to get like a routine going from here on in,” he said. “This is pretty much like a normal summer for me. I’ve been golfing a lot and spending some time with the family. So I can’t complain.”

Gary Zegras, Trevor’s father, is his most frequent partner on the greens. “He’s not bad. He’s scrappy. He’ll shoot two balls into the woods and somehow make a birdie,” the younger Zegras said. “He throws something from the woods and it lands two feet from the flag and then he taps it in.”

He also found a little time for travel thanks to a recent Ducks teammate, taking part in what he called “the Ryan Getzlaf retirement trip” after Anaheim’s season ended.

“He took us all to Cabo [San Lucas], which was nothing short of incredible,” Zegras said. “I didn’t know what we were doing there. I didn’t know how long we were gonna be there. But I just told him I was in. So it was awesome. We had some jet skis and stuff. We had a nice boat. The S.S. Getzlaf.”

Zegras finished second on the Ducks in scoring last season with 23 goals and 38 assists, finishing second in the Calder Trophy (rookie of the year) voting thanks in no small part to the frequency of his viral highlights. That was never more evident than at the NHL All-Star Game in Las Vegas, when the league invited Zegras to the skills competition to compete in its trick shot competition, despite the fact that he wasn’t selected to the All-Star Game.


It was a roller-coaster season for Anaheim, which flirted with playoff contention before ultimately finishing 21 points out of a playoff spot. The Ducks also saw a significant change at the top, as Pat Verbeek replaced Bob Murray as general manager.

While Zegras was having a sensational season, he did feel some pressure to impress a new GM who hadn’t drafted him.

“I’m big on first impressions, right? Obviously everybody wanted to leave a good first impression on Pat. He just knows how to build a culture and build a team,” he said. “Pat is an unbelievable human and the way he’s kind of just taken this team over has been awesome to watch. He’s made all of our lives at the rink so much better.”

Expectations will be higher for the Ducks this coming season, after they made some noise in the offseason by adding defenseman John Klingberg and forwards Ryan Strome and Frank Vatrano to their mix. Joining them will be center Mason McTavish, the third overall pick in 2021 who just had an MVP performance in Canada’s gold medal run at the IIHF world junior championship.

Expectations will be higher for Zegras, too, not only on the stat sheet but on the highlight reel. What does a player do for an encore after pulling off a signature move as a rookie who ended up in a video game?

Has Zegras been cooking up some new material this offseason?

“Honestly, not really. I know that’s probably not what you wanted to hear,” he said. “I’m just working on my game and trying to make sure that I can keep up with these guys.”

The magic will happen organically. Zegras said the important thing now is to master the basics.

“I’m just working on my game. The ham-and-egg stuff, the bread and butter. So nothing too crazy in the summertime,” he said.

Well, outside of ending up on the cover of a video game that specifically added a move named in his honor.

“It’s definitely something that me and my buddies will get a good laugh about down the road,” Zegras said.