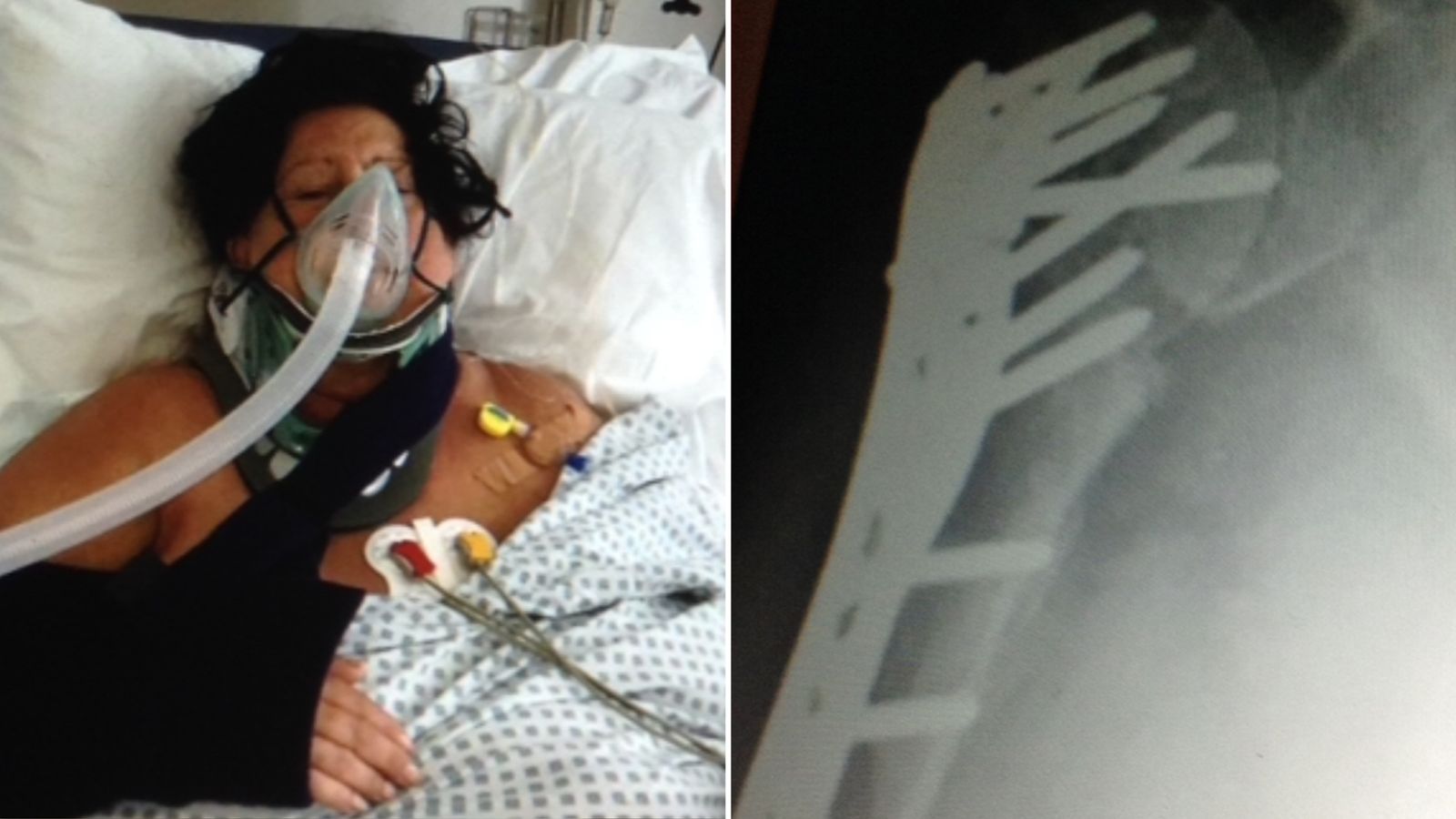 A woman who was nearly killed in a hit-and-run says her life was “ruined” and she wants the driver to get their “just deserts” – as police launch a national crackdown on dangerous uninsured motorists.

Sharon Cochrane spent four months in hospital after suffering a broken leg and arm, eight broken ribs, two broken collarbones and a fractured neck, as well as a bleed on the brain and a collapsed lung.

The 64-year-old Sainsbury’s employee was walking to work in East Ham in London when a car, being driven on the wrong side of the road, crashed into her on the pavement.

Mrs Cochrane told Sky News she was sent “flying into the road” during the incident in July 2018, while the suspected uninsured driver failed to stop and has never been caught.

It comes as UK police forces enforce a week-long operation called Op Drive Insured, which aims to increase the number of uninsured vehicles seized across the country.

Extra attention will be given to the worst-affected parts of the UK, with Birmingham having the highest levels of uninsured driving, according to Motor Insurers’ Bureau (MIB).

The not-for-profit organisation, which compensates victims of collisions involving hit-and-run drivers and uninsured vehicles, said it received more than 26,000 claims in 2021.

Mrs Cochrane said she had to learn to walk again and was bedridden at home for 11 months after being discharged from hospital.

She can no longer drive, she continues to suffer swelling on her legs, and she is unable to bend one of her arms.

“I can’t drive any more because of the pins I’ve got everywhere. All the swelling I’ve still got. There’s so much I can’t do.

“Without catching anyone, you don’t seem to have any closure… you can’t see justice served.

“If they had caught him, and he had been drunk or had been on drugs, he would have got his comeuppance.

“We wish all we can on him and hope he gets his just deserts.”

‘My life was ruined’

Mrs Cochrane said she has no memory of being hit by the car and woke up in intensive care at the Royal Free Hospital in London, surrounded by her family.

“Doctors said to me, they’ve had people with a lot less injuries not make it,” she added.

“Normally I’m a strong person but when I saw what I couldn’t do for 11 months – and in my head thinking, this is going to be forever, not walking, stuck in a bed… the thought of it was making me sick.”

In a message to the driver, Mrs Cochrane said: “My life, my husband’s life, everything was ruined because of this.

“We can all make mistakes – god, I’ve made hundreds in my life – but I personally would have at least stopped and called an ambulance.”

Ranked by postal areas, Birmingham has the five locations with the highest levels of uninsured driving, based on MIB claims, followed by Purfleet in Essex, Smethwick in the West Midlands and the Manchester areas of Cheetham Hill, Crumpsall and Strangeways.

Motorcyclist Graham Hills said he was left in “excruciating” pain and expected to die after he was hit by an uninsured car while he was riding at 60mph.

The collision happened on the A262 in Kent in July 2018 after an elderly driver of an uninsured car suddenly turned into the opposite lane, causing Mr Hills to hit the vehicle head-on.

“I had a momentary flash in my mind – that’s it, I was instantly convinced I was going to die,” he told Sky News.

“I remember being on my back some way beyond the car, having hit it and flown over the top of it and just being very surprised I was still alive and struggling to breathe, with very severe pelvic pain.

“You probably couldn’t get much more pain and still be alive.”

Mr Hills was flown by air ambulance to King’s College Hospital in London, where he had two spells in intensive care after contracting gangrene and sepsis.

He said the driver of the uninsured vehicle was prosecuted for careless driving and driving without insurance and received eight points on his licence and was fined £400.

He said the MIB helped him secure compensation of about £230,000 following the crash.

Mr Hills needed around 50 further hospital visits after being discharged and wore a knee brace for 10 months as he had to learn to walk again.

He can now drive again and said doctors are “amazed” at his recovery.

“They view me as almost a bit of a miracle really because I’m pretty normal in a lot of ways.

“If you were to look at me… you wouldn’t know I had a near-death crash.”

Motorists have been urged to make sure their insurance is valid to avoid being caught up in Op Drive Insured.

Paul Farley, law enforcement manager at MIB, said: “Put simply, uninsured drivers are dangerous. They cause a much higher rate of collisions, and they’re often linked to wider road crime, including hit-and-run crashes.

“It’s sadly become an all-too-common experience to hear on the news that yet another person’s life has been cut short after being hit by an illegal motorist.

“We’re working day and night with our police partners to put an end to this.

“We hope Op Drive Insured sends a clear message that no one is above the law and those who choose to drive without insurance will not get away with it.”

Man arrested over fatal shooting of Migos rapper Takeoff
A way-too-early look at the USMNT depth chart for 2026 World Cup
Gaming’s Oscars night is upon us – here are our picks for the top awards
‘If you touch my hair that’s abuse’: Charity boss tells of ‘violation’ during Palace exchange
William and Kate met by chants of ‘USA, USA’ and pockets of booing as race row clouds visit