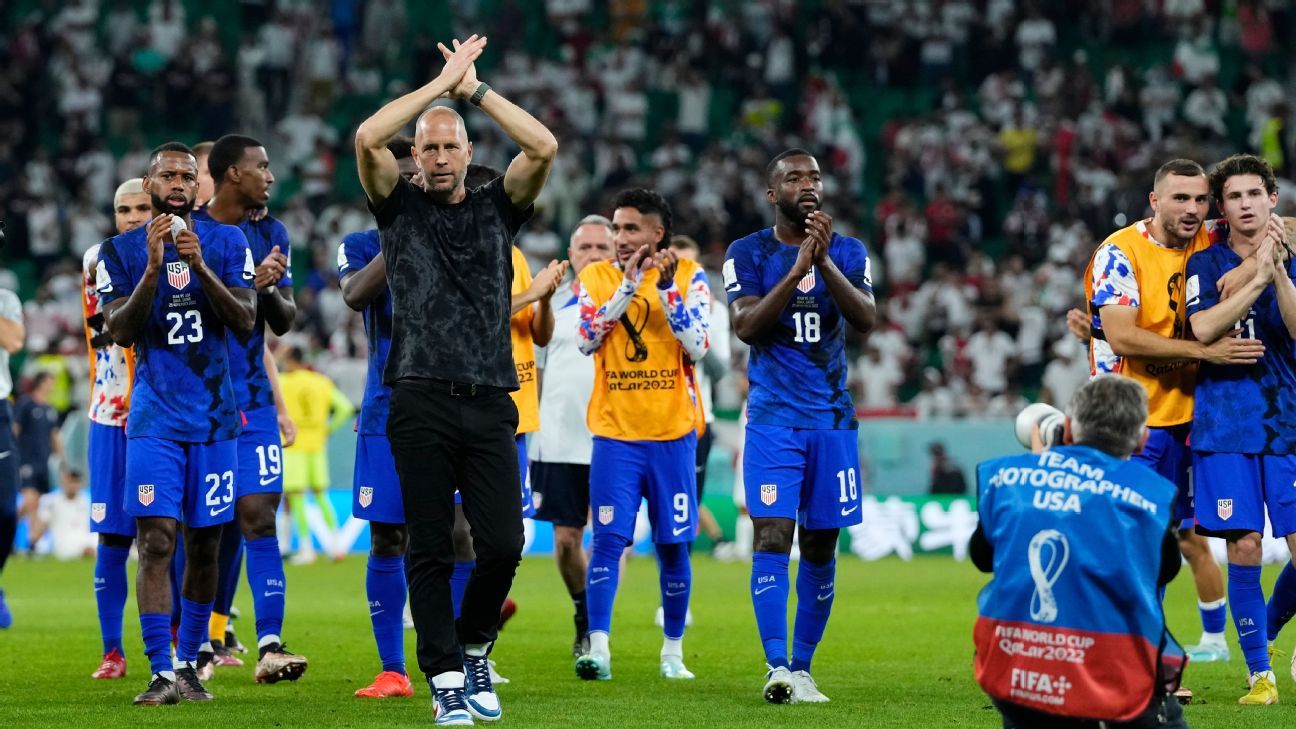 DOHA, Qatar — On Monday, United States men’s national team manager Gregg Berhalter was asked to be, among other things, an economist, a customs agent, an expert on military policy and a United Nations ambassador.

On Tuesday, he finally got to be what he most wanted: a coach who has taken his team to the knockout rounds of the World Cup.

After the USA held off Iran 1-0 at Al Thumama Stadium, Berhalter embraced his coaching staff in a group bear hug in the technical area, their arms wrapped tightly around one another’s shoulders as they bounced up and down. He then jogged out onto the field to bask in the celebration with his players and the raucous contingent of American fans behind the goal.

Four years after taking over a program in disarray, Berhalter had brought the US through what is, by some distance, the biggest win of his career.

“It’s the first time in 92 years that we’ve had two shutouts at a World Cup,” Berhalter said later, his face flushed. “So, the boys are doing something right.”

It was a remarkable 24 hours for Berhalter, the type of incredible juxtaposition that can exist only in international soccer — and only with a matchup like the one the US had against Iran, a country whose history, both on its own and with the United States, is deep and complicated and messy.

That history is what fueled the build-up. The U.S. Soccer Federation played no small part in the uncomfortableness ahead of the game, as it — without the knowledge of Berhalter or his players — posted images to social media that showed Iran’s flag without the Islamic Republic logo in an attempt to show support for women in Iran who are fighting for the most basic human rights.

Well intentioned as it might have been, it nonetheless created a firestorm, and Berhalter was left to navigate it. At his news conference Monday, Iranian journalists volleyed harsh questions at him, asking him to explain why inflation might contribute to a lack of popularity for his team back home or to justify the various visa requirements that the United States has for Iranians who might want to travel there. There was a question about US warships in the region.

It was, by any measure, bizarre, but Berhalter — to his credit — handled it deftly. He apologized for any offense the social media posts might have caused while expressing support for those who are fighting for a better life. He also did his best to push the focus back to soccer. In many ways, this match was judgment day for Berhalter and his players at the end of a four-year resurrection, and Berhalter needed to do whatever he could to make sure his players were up for it.

In short, they were. Castigating Berhalter is a bit of a cottage industry in the circles of those who follow the US team closely — such is life as an international manager, really — but this much is sure: Berhalter has won a Gold Cup and a Nations League. He has beaten Mexico three times (including in World Cup qualifying). He has overseen a complete roster overhaul of young and talented international players, made tough — and in some cases stunning — choices about who to bring to Qatar and has now led that squad to the Round of 16 in the World Cup.

Is he perfect? He’s not. There are still reasonable criticisms to be made of his tactics or substitution patterns, but forward Joshua Sargent was called back in and delivered a strong performance against Iran, as did defender Cameron Carter-Vickers (who came in for Walker Zimmerman). Tim Ream, a surprising late add to the roster just before the World Cup, was stout in defense as well. However stressful it might have been, the USA was able to see out its lead late.

Even more, Berhalter motivated his players, pushing them to meet the moment. Berhalter recalled earlier in the week how he’d watched the US lose to Iran in the infamous 1998 World Cup meeting, and he highlighted how what stood out to him was the mismatch in emotional levels on the field. The Iranians wanted the game so badly, Berhalter said, and it was clear the Americans were nowhere near the same type of feeling.

On Tuesday, that wasn’t an issue. Not even close. There was fire, sure. But also a confidence that the moment wasn’t too big.

“There was a calmness about the team,” Ream said. “No one was breathing heavy or had panic in their eyes.”

It helped that the tactics were in place, too. Christian Pulisic‘s goal was a result of a sequence that Ream said Berhalter and the coaches had specifically emphasized in their scouting, a pulling of the play far to one side in order to expose the back post for Pulisic to attack. The goal was, as Ream said, “perfect, perfect, perfect,” save for Pulisic’s collision with the Iranian goalkeeper that sent Pulisic to the hospital in the middle of the game for an abdominal scan.

Steve Nicol and Craig Burley preview the United States’ round of 16 tie against the Netherlands in the World Cup.

If Pulisic can’t play against the Netherlands on Saturday (or is limited), it will be another bump for Berhalter to navigate. He has options — Giovanni Reyna still hasn’t featured much, and Brenden Aaronson is a lively substitute — but, either way, motivation for the group will be crucial again.

That is what Berhalter wants. He has never shied away from the stakes of his mission. He has said, over and over, that this team’s goal is to change the perception of American soccer around the world. The game against England helped that. So, too, did Tuesday.

Now comes another opportunity. Another chance. Berhalter will endure the arrows; all coaches do. He will shoulder the critiques. All he cares about is getting his players to see what he sees, to know what he knows: That this team can do anything. On Tuesday, after the hugging and the shouting and the video call to the hospital so Pulisic could join in the fun, Berhalter came to another, more traditional news conference, and reflected on what pleased him the most about the night.