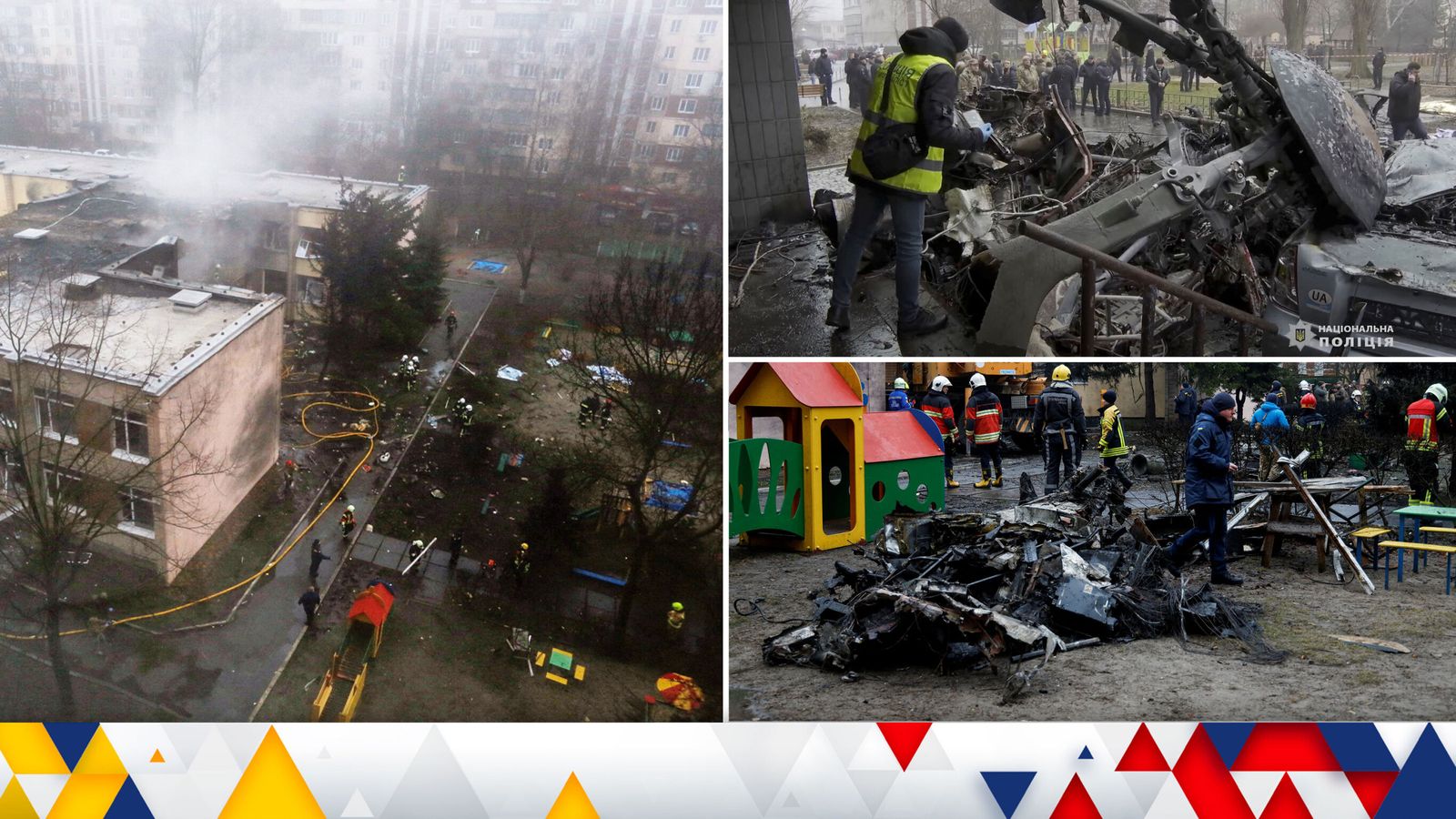 The Minister of Internal Affairs of Ukraine is among 14 people who have died after a helicopter crashed by a nursery in a Kyiv suburb, authorities have said.

Images from the scene show huge flames and a plume of smoke going into the sky in Brovary, which is located northeast of the capital.

Minister Denys Monastyrskyi and First Deputy Minister Yevhen Yenin were among those killed in the incident, as well as a child.

He added: “It is an indescribable pain.”

There has been no immediate information about what caused the helicopter to come down.

Authorities initially said that 18 people had died but this has been revised down to 14.

Footage from what Ukrainian police said was the scene showed flames across a wide area of the suburb where the aircraft came down.

Mr Kuleba added: “At the time of the tragedy, children and staff of the institution were in the kindergarten.

“Everyone has now been evacuated.”

Ambulance services, police and firefighters are working at the scene.

Mr Monastyrskyi, who was in charge of the Ukrainian police and other emergency services, is the most senior Ukrainian official to have died since the start of the war with Russia almost 11 months ago.

“My colleagues, my friends. What a tragic loss. Deepest condolences to their families.”

UK foreign secretary James Cleverly tweeted: “Denys was a true friend of the UK. We are ready to support Ukraine in whatever way we can.”

“News of the death of Denys Monastyrsky, Yevhen Yenin and Yurii Lubkovich has shocked me deeply. My condolences to the families of all the victims of this tragedy. Denys is a true Ukrainian hero – over the last year leading with bravery and stoicism,” she said on Twitter.

“He was my friend. Working with him this past year was an honour. The EUHomeAffairs community and Interior Affairs Ministries in all 27 capitals, will feel this loss greatly. We will continue our work helping Ukrainians and helping Ukraine, in Denys’ memory. Slava Ukraini”

Everyone’s watching Meta’s earnings report for a hint at how online ads are doing
Paris Hilton fans surprised as she announces birth
Government homes in on £5bn cladding settlement with housebuilders
‘Over my dead body’: Proposals to make some NHS patients pay for care spark backlash
Zelenskyy ‘not interested’ in meeting ‘nobody’ Putin for peace talks